Special edition Land Rover Defender 110 Adventure is pricey, but has plenty to get off-road enthusiasts excited 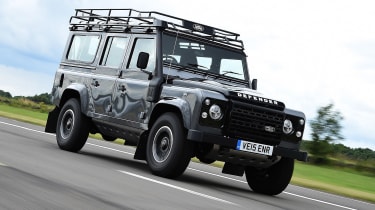 The fact that the Defender is still in production after all these years, and commanding these sort of prices, is an incredible achievement. This Adventure Edition might well be expensive but if you have the cash and want a go-anywhere Defender with some creature-comforts inside, it’s tastefully done. The all-new Defender will undoubtedly be cleaner, faster and sharper to drive, but it has its work cut out if it’s to match the outgoing car’s charms.

The Land Rover Defender has come a long way since Rover’s then engineering director Maurice Wilks etched its profile in the sand at Red Wharf Bay in Anglesey, Wales. That was 68 years ago, and while it was originally conceived as a light tractor and off-roader, it’s become somewhat of a fashion icon in recent years, despite its agricultural roots.

With production of the Defender now winding down in preparation for an all-new model due next year, Land Rover has released a trio of special editions to cash in on the Defender’s enduring popularity. The Autobiography Edition adds every conceivable luxury, plus a power boost to its 2.2-litre diesel engine from 120bhp to 148bhp, and starts from a shocking £61,845.

The Heritage Edition –priced from £27,800 – tugs mercilessly at the heart strings with its pale green paintwork, contrasting white roof and HUE 166 graphics – all nods to the first ever pre-production Land Rover, known affectionately as Huey. 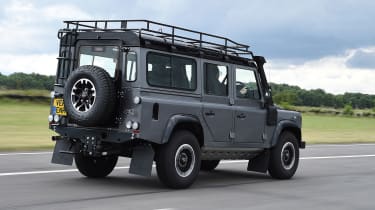 The one we tested, however, was the Adventure Edition, one of only 600 that will be produced. It's the rough and ready member of the group, kitted out to maximise the Defender’s legendary off-road ability but fitted with a plush interior to make it more bearable on public roads. Underbody protection for the side sills and engine sump, a snorkel to maximise wading depth, heavily-treaded Goodyear MT/R tyres and a ‘Defender Expedition’ roof rack (with a rear ladder to access it) mean you’re not only prepared for whatever mother nature can throw at you, but it’s a seriously mean-looking machine.

There are other design tweaks to look out for, too, including a black bonnet, roof and rear door, along with black headlight surrounds, a blacked-our grille and - you guessed it - black wheel arches. All of which is not so noticeable in the Corris Grey finish of our test car, but really stands out if you go for either of the other two colours – Yulong White or retina-searing Phoenix Orange. 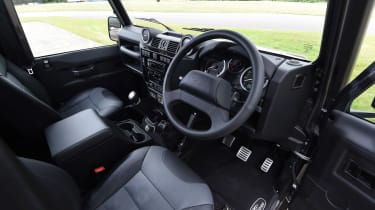 In contrast to the action-man exterior, the inside is neatly trimmed with seven leather seats, and yet more leather on the steering wheel, gear knob, handbrake, door panels and glove box. It’s not quite a Range Rover in there, but you can tell Land Rover is a past master at plush cabins.

Of course, all the usual ergonomic problems remain – your right arm is squashed against the door so in traffic you find yourself winding down the window to let your elbow hang out, while the after-market Alpine stereo has Bluetooth connectivity, but is unfathomable to use.

Zero adjustment for the steering wheel means you have little say in your driving position – it’s high, upright and with your nose close to the near-vertical windscreen. That ‘commanding driving position’ that has become the buzzword for the modern SUV boom – well, the Defender had it nailed nearly seventy years ago. So, it all feels a little awkward at first, but get a few miles under your belt and you soon start to learn, and love, the Defender’s quirks. 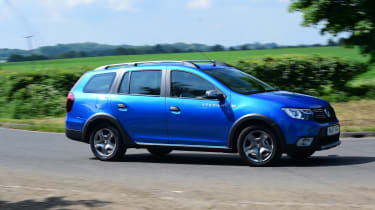 The steering is slow and heavy by modern standards so corners need to be taken slowly, not just because the weight transfer is immense and obvious, but because you need enough time to wind on and off the lock. In a straight line the 120bhp 2.2-litre diesel crashes up through the rev range with one hell of a din, but it’s easily quick enough to get smartly off a slip road and up to speed with motorway traffic.

The clutch is heavy and long gearlever needs a bit of muscle, but that simply forces you to plan ahead for your changes and keeps you constantly involved in the process of driving – a far cry from the detached experience with many a more modern off-roader.

The squidgy off-road tyres means front-end response is hilariously slow. You turn the wheel, wait for a few seconds, wait a few more, and then the nose follows your inputs as the whole body dives towards the outside wheels. This is a car to be driven slowly and deliberately on tarmac, or when the occasion calls for it with complete confidence off-road.