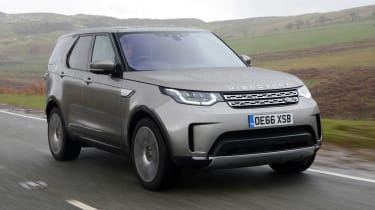 Regardless of where you stand on the looks, it’s impossible to ignore the new Land Rover Discovery’s enormous breadth of talents. It’ll play the practical family car, the luxurious cruiser and the off-roading hero all in one day, and with much less weight to carry around, it stops, goes and steers better than ever. The spacious and upmarket interior is brimming with neat tech, while it’s very nearly as comfortable as a Range Rover. Even the four-cylinder diesel impresses - but in HSE Luxury form you’re definitely paying for what you get.

The iconic Land Rover Defender is worshipped globally as an off-roading legend, but the almost-as-capable Discovery is often overlooked. It’s been on sale now for 28 years, successfully bridging the gap between the basic Defender and luxurious Range Rover in the British car maker’s line-up.

Now in its fifth generation, the seven-seat Discovery has moved further towards the premium end of the market than ever, with prices starting from £43,495 and rising to nearly £70,000 - before you’ve even troubled the options list. We’re trying it in the UK for the first time, with the entry-level SD4 diesel engine and high-end HSE Luxury trim, to see if the Disco has gone even the teeniest bit soft. 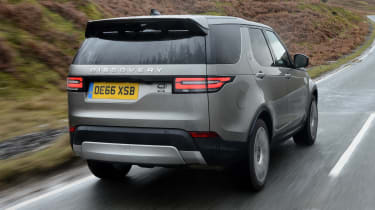 You’d be forgiven for thinking it has, on first impressions at least. Gone is the unashamedly boxy and imposing look of the outgoing car, replaced by a much more rounded and classy design. The front end has adopted the family style and looks strikingly similar to the smaller Discovery Sport, though the bulky rear end and offset number plate doesn’t sit that well with our eyes. Looks are entirely subjective, however, and there were many who never warmed to the styling of the old model.

Thankfully, there’s less to question about the hardware underneath the new Discovery. The old car’s heavy chassis has been replaced by a monocoque design, with liberal use of aluminium, so the new model is up to 480kg lighter. Mud-plugging ability hasn’t been compromised, though; there’s still the suite of the brand’s Terrain Response systems, clever integral-link rear suspension, a full spare wheel and a strong 900mm wading depth. In fact, Land Rover says this is its most capable off-roader yet. 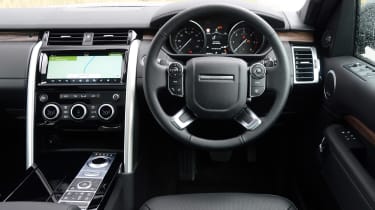 On our test route, which involved plenty of on and off-road driving, we were impressed by the Discovery’s prowess in ploughing through and over everything in its path. The multitude of modes in the Terrain Response system – including new gadgets such as auto-steering Trailer Assist, low-speed off-road cruise control, and Low-Traction Launch – can give even the novice off-roader confidence in the car’s ability.

However, where the old car was hugely capable off the road but a bit of a lumbering beast on it, the new Discovery expertly balances both. The reduced weight shows up in greater agility in the bends and an unflappable composure. Granted, this is still a 2.2-tonne family SUV, so there’s plenty of body lean and the steering isn’t exactly super-sharp, but it’s far more car-like and is keener to respond to inputs than it’s ever been.

Most importantly, though, the Discovery 5 hasn’t lost the supple and relaxed feel in its control weights and suspension. It’s not really at home when pushed hard, where the body starts to shudder over mid-corner jolts, but soften the pace and the body stays nicely level over bumps and crests. The ride can get slightly jittery over certain poor surfaces, but most of the time it’s extremely comfortable, thanks to the soft seats and excellent driving position. Wind and road noise are very well suppressed, too.

We’re even surprised by the SD4 diesel engine. This is the first time we’ve seen a four-cylinder in a Disco for decades; it’s the Ingenium diesel we’re familiar with from across JLR’s range. It seems much quieter in this model than lesser Land Rovers, producing a subdued background hum that only gets raucous when revved out.

Performance is decent, too; it won’t out-drag rivals, but it manages to keep the effortless feel usually reserved for six-cylinder units. You can still have a six-pot diesel (for only £1,500 extra) but it only takes two tenths of a second off the 0-62mph time and both versions have the same 3,500kg towing capacity. The option is there if you prefer the silky smoothness of such an engine, but you shouldn’t feel short-changed with the SD4. 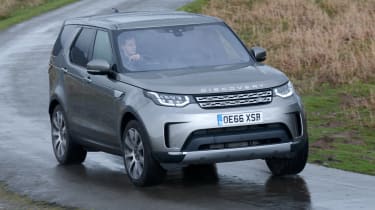 Unlike the Discovery Sport, which can feel a bit cheap in places, the Discovery’s cabin quality is first-rate. It looks good, everything is laid out in a logical fashion, and while it lacks Audi’s fancy digital instruments, the 10-inch touch-screen infotainment system is slick and clear. There’s space for seven full-size adults to sit comfortably, too (something which can’t be said for many seven-seat SUVs) or a huge boot, while there’s so much storage on board that you could easily lose most of your possessions in minutes.

There’s also a dazzling array of tech on board HSE Luxury trim – easily as much as you’d expect from the Range Rover – and neat touches like a smartphone-controlled electric folding mechanism for both rows of rear seats. But the cost illustrates this; this version of the Disco is now priced like a Range Rover, and rivals from Audi and Volvo can be had for a fair bit less, spec for spec.