Freelander eD4 is the first two-wheel drive Land Rover, but is the eco-friendly off roader hit or miss? 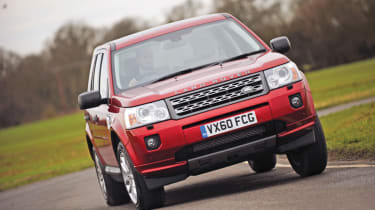 The eD4 is a bold break from tradition – and it’s an impressive effort, managing to retain all the comfort and utilitarian appeal of the standard Freelander while offering the lowest running costs in the entire range. Some customers will still prefer to pay extra for the added security and go-anywhere ability of the 4x4, but for most this is all the Land Rover they’ll ever need. While some rivals are better to drive, few can match the Freelander’s effortless composure and sheer class.

It’s a Land Rover landmark! This Freelander is the first two-wheel-drive car ever to bear the green oval badge – but how does it compare with the rest of the range? We tried it on UK roads to find out.
From the outside, it’s impossible to tell the new eD4 apart from four-wheel-drive versions – the badge on the bootlid is the only giveaway. But there are a few subtle tweaks being rolled out across the range.
Video: watch CarBuyer's video review of the Freelander
[[{"type":"media","view_mode":"content_narrow","fid":"68635","attributes":{"alt":"","class":"media-image"}}]]
The revised grille and squared-off foglights bring the Freelander into line with the plush new Discovery 4. And fresh alloy wheels, plus a chrome strip along the tailgate, add a touch of class to the model’s upmarket good looks.

Because this is the firm’s greenest model ever, there is a host of mechanical tweaks designed to maximise efficiency. Under the bonnet is a revised version of the 2.2-litre diesel engine. Power has been reduced to 148bhp, but there’s an extra 20Nm of torque thanks to a new turbo and intake system. The stop-start technology has also been improved, making restarts a quick and seamless affair.
When combined, the changes mean the Freelander returns 47.2mpg and emits only 158g/km of CO2 – competitive figures for a car of this size, but still short of the best in class. The blunted performance is hard to perceive on the move, as the loss of a rear differential means the eD4 is 75kg lighter than its 4WD counterpart.
Although the engine feels a little sluggish at low revs, it becomes punchy and refined once into its stride. There’s a slight reduction in grip – the nose starts to run wide sooner than before – and less off-road ability, as it does without the trick electronics of the 4x4.
But on the tarmac, this Freelander feels similar to the all-wheel-drive version. The dynamics still impress, as the direct steering and slick controls make it easy and relaxing to drive. Meanwhile, the composed ride and hushed cabin are on a par with a luxury saloon’s.
Our top-spec HSE’s interior comes laden with equipment, and is reassuringly robust. The tall roof means there’s loads of space for passengers and luggage, yet despite the Freelander’s lofty driving position, the imposing dimensions mean it still feels bulky when manoeuvring through traffic. This Land Rover might be front-wheel drive, but the countryside is still its natural habitat.
Rival: BMW X3 xDrive 20d
The all-new X3 is still four-wheel drive, but EfficientDynamics tweaks mean it emits only 149g/km of CO2 and returns more than 50mpg. Its car-like handling impresses, too – although it can’t match the Land Rover’s boot space or kit.
Share this on TwitterShare this on FacebookEmail