The revised Freelander gets sharper looks and an upgraded cabin, but some familiar flaws remain 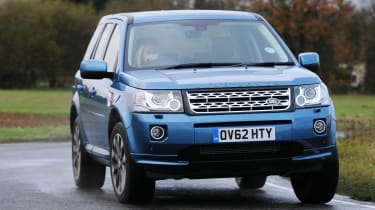 The Freelander is improved by this facelift, but not by much. The tweaks have sharpened up the looks and cabin, although there are no upgrades in other important areas. The engine is among the most inefficient in this class and it can’t match the refinement of BMW’s or Audi’s four-cylinder diesels. This HSE Lux is very expensive, too.

The tremendous success of the Range Rover Evoque has cast a bit of a shadow over the Freelander. So, in an effort to shift some of the limelight back on to Land Rover’s old star, the company has given it a bit of a makeover.

The engine line-up and chassis remain identical, but there are now new headlights incorporating the same LED design as the new Range Rover. The rear lights are fitted with LEDs, too, and this new Mauritius Blue paintjob adds a bit of excitement to the range.

Climb aboard and you’ll notice a few Evoque-inspired updates. The Terrain Response dial has been ditched in favour of buttons behind the gearlever, and the traditional handbrake makes way for an electronic switch.

As a result it feels a lot less cluttered, and a lot more upmarket. It can’t match the eye-catching luxury of the Evoque, but then the Freelander is intended to be one of the more utilitarian members of the Land Rover family. Nevertheless, our range-topping HSE Lux model comes with Windsor leather seats, a 17-speaker sound system, a seven-inch touchscreen and 19-inch diamond-turned alloys.

On the road, the Freelander feels the same as ever. Things don’t get off to the best start, with a noisy and slightly harsh sound from the 187bhp diesel engine. However, once you’re up to speed, it quietens down slightly. Acceleration from 0-62mph takes 9.5 seconds, so it feels fairly nippy, too.

The Freelander’s most impressive attribute has always been the comfortable ride, and it still shines through in this facelifted model. The 19-inch wheels add a degree of firmness over small road bumps and ridges, but it’s barely noticeable most of the time.