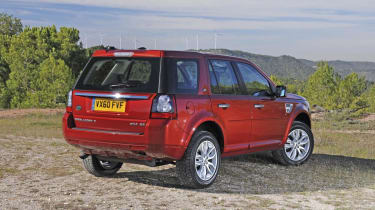 On the road or off it, this latest Freelander is an impressive car. It serves up comfort, space and decent performance, and now puts out less CO2 as well. The idea of a two-wheel-drive Land Rover might upset the purists, but the company has to shape up, and with nearly a quarter of European SUV sales being front-wheel-drive variants, this new offering leaves it ideally placed. In fact, this new entry-level model could be all the Land Rover you’ll ever need.

Meet Land Rover’s new green machine! With environmental pressures ever present, the firm needs to clean up its act... and quickly. So it’s introducing a new two-wheel-drive Freelander, due in dealers in January. It’s sure to upset Land Rover’s 4x4 faithful – but Auto Express was first behind the wheel to see if the newcomer is the best 4x2 by far.
The front-wheel-drive model is being introduced alongside a raft of upgrades to the entire compact SUV line-up for 2011.
Video: watch CarBuyer's video review of the Freelander
[[{"type":"media","view_mode":"content_narrow","fid":"68635","attributes":{"alt":"","class":"media-image"}}]]
This comprises a minor styling makeover to bring the model’s looks in line with the plusher, posher cars in the range. There’s a new front bumper with squared-off foglight surrounds, new halogen headlamps and a reworked grille.

In addition, buyers get new alloy wheel options, tweaked tail-lights and a horizontal strip of chrome which runs across the width of the tailgate. The changes aren’t exactly drastic, but they add a little extra class to the Freelander’s rugged looks.
Inside, the updates are just as difficult to spot. A closer inspection reveals all-new seats with improved leather upholstery.
But as you’d expect from a car that differs so much from the traditional Land Rover brief, the major changes are under the skin. For a start, the two-wheel-drive model is fitted with a revised version of the 2.2-litre common-rail diesel engine. A new turbocharger, plus improved air intake and exhaust manifolds, help boost torque by 20Nm, taking the total to 420Nm.
The front-driven model comes exclusively with a six-speed manual gearbox, but that means the improved stop-start system, which Land Rover claims now works 22 per cent faster, is fitted as standard.
Switching to two-wheel drive has cut the Freelander’s weight by 75kg, to 1,710kg. And when combined with the revised engine, this means the car now claims 47.2mpg economy and 158g/km emissions – making it the cleanest Land Rover ever.
On the road, there’s little immediate difference. Around town, the steering is light and the pedals and gearbox work with a reassuring slickness. Add the comfort of the new seats, on top of the superb visibility afforded by the high driving position, and the Freelander is easy to drive.
The new stop-start system is a definite improvement, too, restarting the car faster, with much less noise and vibration.  However, the eco tweaks mean the engine isn’t very responsive at low revs, so you need to make sure the turbo is boosting – from around 1,800rpm – to get adequate response.
As the powertrain drives the front wheels only, it’s quiet and refined, too. However, the wing mirrors are 10 per cent larger, which adds a little extra wind noise on the motorway.
On twisty roads, the car is still sharp to drive, although the front wheels feel as if they’re working harder. The Freelander gives in to understeer sooner, and doesn’t have the same surefootedness as the four-wheel-drive model.
But what really impresses is the level of off-road ability – even though this version does without the clever Terrain Response or Hill Descent Control systems, as well as 4WD. The high ground clearance and suspension travel are carried over, so as long as you attack obstacles with extra verve, the Freelander is still a formidable all-rounder. Even if it is ‘only’ a 4x2.
Share this on TwitterShare this on FacebookEmail