Do nip and tuck styling and fresh diesel keep 4x4 on top? 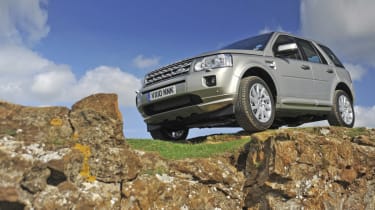 An already accomplished car just got a bit better. Everything that made the previous Freelander so popular – its off-road ability, on-road refinement and sumptuous cabin – remains. Plus, the greener, more powerful diesel and enhanced styling make it a more enticing product. But at £35,510 for this flagship, buyers might be tempted by the upcoming Range Rover Evoque.

The Freelander is boldly going where no Land Rover has gone before! This is the new facelifted model, featuring fresh engines and updated looks. Plus, for the first time in the firm’s history, a two-wheel-drive version is on the way.

Previously, the 158bhp 2.2-litre four-cylinder diesel was the sole power option. But the unit has been recalibrated, fitted with a more efficient turbocharger and is now offered with a choice of outputs: 148bhp and 187bhp.

As the ultra-efficient two-wheel-drive Freelander doesn’t arrive until January, we tried a top-spec SD4 HSE, with the more powerful engine mated to an auto box as standard. Despite the extra grunt, this car claims 14 per cent better CO2 and economy, at 185g/km and 40.4mpg respectively.

On the move, the four-cylinder still can’t match the silky smoothness of the six and eight-cylinder units in larger Land Rovers, but it provides plenty of torque for punchy acceleration, especially with the additional horsepower.

A superbly insulated cabin means engine and road noise are virtually eliminated at anything but full throttle, while effortless steering and comfortable seats – now in higher-grade Windsor Leather – make the car perfect for long trips.

Styling changes are subtle to say the least. A fresh front bumper, reshaped foglights and new honeycomb grille mark out the SUV, with the latter getting a bright finish on our 187bhp model and darker metal on the 148bhp variant. At the back, the tailgate handle is now body coloured, with a full-width chrome strip. The similarities to the outgoing Freelander are just as obvious from behind the wheel, as the newcomer is still imperious off-road, and retains its relaxed manners and superb refinement on the tarmac.

Even though it has gained 30bhp, the revised engine offers similar pace. But you can’t argue with the improved economy and impressive performance figures. However, the model that will really shake up the compact SUV class is the front-wheel-drive-only eD4. It promises 47.2mpg economy and 158g/km of CO2 – and proves Land Rover is taking its environmental responsibilities seriously.

Rival: BMW X3 New X3 debuts at this week’s Paris Motor Show, and with the xDrive20d variant returning 50mpg-plus, it’s the class’s economy king. But prices start at a hefty £30,490.