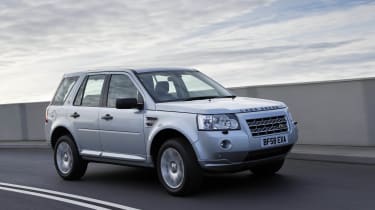 Styling/Image Taking its cues from the bigger Range Rover Sport, the Freelander is a traditionally upright and chunky SUV. It looks a little dated alongside the Audi Q5 and Volvo XC60, but the British car still has plenty of on-road presence. There’s also a comprehensive line-up of trims to choose from – S, GS, XS, SE, HSE and HST. All models get alloy wheels, and air-conditioning, while the range-topping HST is kitted-out with leather trim, heated seats and privacy glass.

Interior/Practicality Climb aboard and you’ll find a cabin that serves-up decent practicality and space, while high quality materials and solid build create a premium feel. The high set driving position gives a commanding view of the road, and the dashboard is attractively styled and well-laid out. Lifting the large tailgate reveals a useful 755-litre luggage bay, which extends to 1,670-litres with the rear bench folded flat. The only downside is an extremely high sill that can make loading heavy objects a struggle.

Engine/Performance Making an engine choice is straightforward, as Land Rover offers only two powerplants. Petrol fans get a Volvo derived 230bhp 3.2-litre straight six that’ll haul the heavyweight Freelander from standstill to 60mph in 8.4 seconds. However, you’ll pay the price at the pumps, as fuel consumption rarely rises above 20mpg. For most owners, the refined 2.2-litre oil-burner is the best choice. Co-developed with PSA Peugeot/Citroen, it delivers decent urge and will return 30mpg.

Driving experience Land Rovers are famed for their incredible mud-plugging ability – and the Freelander is no exception. Few rivals can match it in the rough stuff, thanks to its hi-tech Terrain Response system. But the biggest surprise is the car’s agility on tarmac. Body roll is kept in check, while the steering is direct and well-weighted. Better still, a supple ride and refined cabin make the Land Rover a fine choice for long journeys. If your budget can stretch to another £1,340, then we’d recommend specifying the slick-shifting six-speed auto gearbox.

Ownership Costs Prepare for big bills if you want to run a Freelander as your company car. Even the relatively efficient 2.2-litre diesel engine emits 194g/km of CO2. Factor in the high price, and it will cost you more than almost all of its rivals. Pick the petrol engine and the bills get even bigger. Residuals aren’t a strong point either, with the oil-burner struggling to retain 40 percent of its value.

Safety/Environment A five star EuroNCAP rating marks the Freelander out as safe choice for its occupants. With CO2 emissions of 265g/km, the petrol powered Land Rover won’t be at the top of an eco-friendly buyer’s shortlist. However, the British firm is gearing up to launch a stop-start version of the diesel-engined car, which is claimed to benefit from a 20 percent reduction in fuel use. To cap off its environmental efforts, the company also promises to offset the carbon emission of all new models for the first 45,000 miles.