The big verdict on groundbreaking new star set to change the way we think about 4x4s forever. 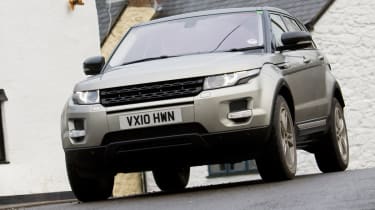 It’s one of 2011’s most eagerly anticipated new cars. And while our first on-road experience of the Evoque may have been from the passenger seat, it was enough to convince us this model rewrites the 4x4 rulebook – much like the original Range Rover did in 1970.
With a supermini’s emissions, the Evoque is set to end Land Rover’s gas-guzzling reputation once and for all. Factor in stunning looks, handling closer to that of a sporty coupé than a 4x4, and all the ride comfort and sophistication you’d expect from a Range Rover, and bosses’ sales predictions of 100,000 units a year are already starting to look conservative.
Video: watch part one of our video review of the Range Rover Evoque
[[{"type":"media","view_mode":"content_narrow","fid":"68683","attributes":{"alt":"","class":"media-image"}}]]
Watch part two here

Step inside, and the link between the normal Range Rover and the Evoque is clear, although the newcomer boasts a trendier look, while its dials and controls are scaled down to take into account the car’s smaller dimensions.
There’s no skimping on quality, though, because the sumptuous leather and brushed aluminium trim is first-rate – even on our test and development prototype model.
The 2.2-litre diesel unit is extremely quiet and refined – even at low speeds. And thanks to Land Rover’s latest stop-start system, it can return close to 50mpg. The six-speed automatic box is slick, too: you can either leave it to change gears itself, or override the shifts with the steering wheel-mounted paddles.
Our drive was with Jaguar-Land Rover’s handling and ride guru, Mike Cross, who told us: “We wanted the Evoque to be more sporty, edgy and agile than other Range Rover models. We wanted it to push the boundaries for this type of vehicle.” It really shows, too: the way the car reacted to Cross’s measured steering inputs had to be seen to be believed.
It tackles corners with minimal body roll, and we weren’t surprised to learn that the Evoque had been benchmarked against the MINI Cooper and Audi TT for handling.
But engineers haven’t used rock-hard suspension to achieve this – the car retains the sophisticated ride of the larger Range Rover, so remains as comfortable as your favourite armchair.
We’ll have to wait to see if the Evoque shares its brother’s superb off-road capabilities, but as Land Rover has a proven record of delivering the best, we see no reason to doubt it.
After our ride on the roads of Wales, we are certain the Evoque will be a hit. The manufacturer already has a list of 100,000 potential customers – and after our experience, it’s clear they won’t be disappointed.
Share this on TwitterShare this on FacebookEmail