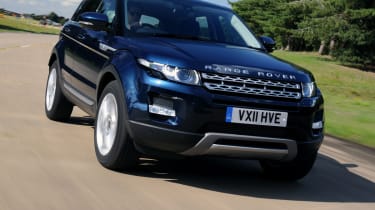 As with the MINI, the Evoque is one of those rare cars that has crossed over into the public consciousness – and the hype has been justified. Even though it’s termed a ‘baby’ Range Rover, it has a personality all of its own, and has carved out a new niche in the market. No SUV currently on sale comes close to matching its blend of show car looks, sporty driving experience and incredible all-terrain ability. And while it’s expensive (particularly if you add some option packs, which customers will find it very tempting to do), it has the kind of desirability that will enable buyers to justify spending the extra to get the Range Rover badge – and a cracking car – on their drive.

“It’s not a proper Range Rover, is it? It’s more like a car.” The well dressed middle-aged man is no longer admiring the yachts in Stoke Quay, Ipswich. His attention has turned to the new Evoque. And he’s not convinced. “I’ve got one of the last 1994 Range Rover Classics,” he continues. “I’ve had a Discovery, too. They’re all workhorses as well as being luxury cars. But this…”
Well, the new Evoque may be the smallest, most efficient Range Rover ever, but it’s still a luxury car and a true off-roader, too. We invite him to take a look inside. “Actually, I really like it. You still sit quite high up,” he says, standing back. “I also love the way it looks.” So he’d buy one? “Yep, as a second car. I’d keep my Range Rover, of course.”

Video: watch part one of our video review of the Range Rover Evoque
[[{"type":"media","view_mode":"content_narrow","fid":"68683","attributes":{"alt":"","class":"media-image"}}]]
Watch part two here
Initial scepticism turned to a sale in a moment. Auto Express could get a job in a Land Rover dealership! But then the Evoque needs little selling. No new car we’ve driven in recent years gets as much attention, and with 18,000 pre-orders worldwide, that desirability is being translated into cash.
But while it’s got showroom appeal, is it as capable on the high street as it is on a muddy track? Finally, we can answer that question – because this time, the Evoque has nowhere to hide.
The car you see here is not a prototype, it’s a showroom-ready Si4 powered by a 237bhp 2.0-litre turbo petrol, with a six-speed automatic gearbox and four-wheel drive. It’s one of the flagship models, and carries a price tag to match: £38,995.
From the moment you lay eyes on it, you can tell Land Rover has got the proportions spot-on. This is a car that has been translated almost directly from the Detroit 2008 LRX concept to the road – and even in five-door form, it looks chunky, purposeful and daring. Despite its high shoulder line and relatively small windows, the Evoque feels airy inside. Even without a panoramic glass roof there’s plenty of light – although it’s an option you’ll definitely want. Running the full length, it helps counter the thick C-pillars.
This five-door has ample space, though – it’s 15cm longer than a VW Golf and 30mm taller than the three-door Evoque Coupe. So even tall adults will find the rear seats comfortable.
Up front, the driving position is fantastic. You sit ‘in’ it, rather than ‘on’ it, as you do in a Freelander, yet somehow the position is still lofty, so the Evoque feels sporty without sacrificing visibility.
The quality of the interior will worry rivals such as the Audi Q5 and BMW X3, too. The chunky centre console and dash are made of a mix of tactile plastics and metals, while the jewel-like crystal-effect dashboard dials are a welcome nod to the concept.
Our flagship Dynamic model had a LUX pack, which includes goodies like a powered tailgate, 825-watt Meridian sound system and an eight-inch dual-view touchscreen display with a TV. But all models come with Terrain Response – which offers various settings for different off-road surfaces – as well as Hill Descent Control and MagneRide adaptive dampers.
On the move, the Evoque is a hit. It’s agile, yet still has a ‘big-car’ feel that makes driving the larger models in the Land Rover line-up so relaxing. When cornering hard, its 1,640kg weight is noticeable – which does lead to some understeer at the limit. But initial turn-in is sharp, the adaptive dampers keep the body in check, the steering is precise and it’s a lot of fun to drive. And remember, this is still a Land Rover at heart – it has more than enough off-road ability for most buyers.
Our 237bhp 2.0-litre turbo petrol model was fast as well, with strong in-gear punch and a 0-60mph time of just over seven seconds – enough pace to worry a Golf GTI. It proved quiet on the motorway, running at only 2,000rpm at 70mph. The six-speed auto box can hunt a little as it tries to select the right gear – the added torque of the 2.2-litre diesel should be better – but it’s smooth and you can always take over with the steering wheel-mounted paddles.
Just don’t expect much more than 25mpg in regular driving – most buyers will be better off with a diesel. The entry-level front-driven 148bhp 2.2-litre oil-burner returns more than 50mpg and emits only 130g/km of CO2. If you want more power, there’s also a 187bhp version.
Niggles? Well, we don’t have many. But with prices kicking off at £27,995, it’s not cheap. Adding the Lux pack and other goodies to our flagship took its price to £45,000. We expect most buyers to spend at least £35,000 on their Evoque. However, this is the coolest, most desirable car of 2011. And every inch a proper Range Rover.