Range Rover Evoque with nine-speed box was impressive. Now we try the diesel, but can it keep the Evoque on top? 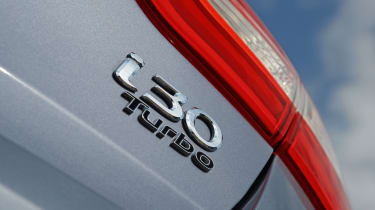 The Range Rover Evoque is one of the first cars to get this nine-speed ZF box, and it’s a fine upgrade to a talented SUV. If you want a practical and fairly efficient model that looks great inside and out, the baby Range Rover is as good as ever. Tot up our car’s options, though, and it costs £49,659 – which looks a lot when a well specced new Nissan Qashqai is about £20k.

The juggernaut of Range Rover Evoque sales shows no signs of slowing, and to keep it that way Land Rover has carried out a major mechanical upgrade for the 2014 model year. This includes the addition of a new nine-speed automatic gearbox.

Last time we tried this new car, it was fitted with the top-spec Si4 petrol turbo, but the SD4 diesel automatic tested here will be a far bigger seller.

Changes to the exterior design are negligible – in fact, the brand is planning to leave the dramatic design untouched for a while yet – so the main difference is hidden under the body.

The gearbox’s three extra ratios are designed to improve fuel efficiency and refinement, although they won’t cut running costs as dramatically in the diesel as in the petrol Evoque. That’s because it does without the Si4’s Active Driveline decoupling set-up.

Still, for a powerful and capable off-roader, the SD4’s near-50mpg economy claim and CO2 emissions of just 159g/km aren’t bad, even if the manual is cleaner.

The slick new gearbox has an impact on the way the car drives as well. It’s even smoother when setting off from a standstill, and you soon learn that different amounts of throttle help control what gear you’re in. Push down lightly and the auto will short shift as quickly as possible to save fuel, but it can also kick down quickly if you need more power, dropping ratios with only a split-second delay.

For the maximum control there is also a manual mode, which allows you to change gear yourself using the steering wheel-mounted paddles. Still, if you’re driving quickly, it’s easy to end up flicking between third and fifth and ignoring the taller high gears, which only come into their own at cruising speeds.

The upshot is that at a steady 70mph on the motorway, the 2.2-litre diesel is spinning at just under 1,500rpm – and is hushed and very relaxed as a result. It can hustle down the road when required, though, and a generous 420Nm torque figure means it feels brawny enough to tow a heavy load or drag you up steep slopes – not that the majority of owners are ever likely to need it to do either.

The 2014 Evoque also comes with a suite of new safety kit from the bigger Range Rover, including a wading depth sensor, lane departure warning system, traffic sign recognition and blind-spot indicators – this is part of the optional Intelligent Pack, which adds £700 to the list price.

On the move, refinement is good overall and the ride is decent over most road surfaces, although the odd bump can upset the vast 20-inch wheels, sending a nasty jolt up into the cabin. The steering is nicely weighted, but it doesn’t give you complete faith in what the front wheels are up to.

Inside, the Evoque remains as lavish as ever, and our car had the LUX pack, which costs an eye-popping £4,650 but adds desirable extras like the high-powered Meridian sound system, a digital TV tuner and a full-length panoramic glass roof.