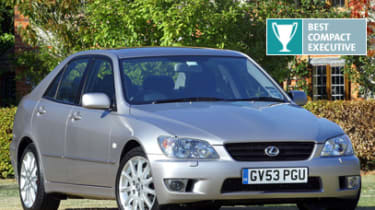 This is a sector in which image, style and quality are all key factors for success. Lexus's previous-generation IS has all three in abundance, and its still the highest-rated model in its class. That's an incredible achievement for what is now a used car, and one that leaves rival models from BMW and Audi frustrated in second and third place. Were still waiting to see if the all-new IS can match the enduring appeal of its predecessor, but for now Lexus's reign at the forefront of the premium car market looks unfaltering. At least BMW can be satisfied with having two models in the top five, its previous-generation 3-Series only narrowly missing out on fourth place. While the saloon version was replaced in 2005, coupé and convertible models have ceased production only recently. Mercedes trusty C-Class claims a credible fourth-place finish, but the introduction of the all-new version later this year will undoubtedly see the three-pointed star challenging for even higher class honours once more.

“The plus points are that it's smooth, reliable, looks great and is very comfortable. On the negative side, my IS is expensive to both run and maintain.”

“The best purchase I ever made.”

“Drives well looks great. Bit of a gas guzzler, though.”

“Quite thirsty for its size, but not expensive to run because it keeps its value quite well and has never needed repairs etc. A delight to drive (if not to reverse park).”

Driver Power is now in its sixth year, and amazingly, Lexus has been the top manufacturer in every single survey. That's an incredible achievement, and one that no other car maker is ever likely to match. In this year's poll, you have voted the firm's line-up into the top spot in the ease of driving and build quality ranks. Needless to say, Lexus is hot favourite to retain its position in 2008.