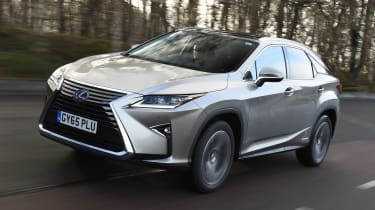 Despite a 3.5-litre six-cylinder petrol sitting under the bonnet, the RX 450h hybrid is surprisingly economical. Every version comes with 20-inch alloys, so there’s no difference in economy between top variants and lesser versions with smaller wheels. Under WLTP testing, the RX delivers 35.7mpg, while the 7-seat RX L is a touch less efficient at 34.4mpg.

Emissions for the RX are 134g/km meaning the 450h is initially not too expensive to tax, but will incur an extra charge after the first year due to all versions being priced over the £40,000 threshold. The RX L remains in the same tax band at 138g/km.

There's plenty of standard kit too, so you won't feel like you're missing out on optional extras.

Both the RX and RX L sit in groups 41-42 for insurance, with the F Sport and Takumi versions being most expensive.

Residual values for all RX models are particularly strong, and you can expect it to hold its value better than a Volvo XC90, a BMW X5 and some Audi Q7 variants. After three years and 30,000 miles, an RX or RX L should retain at least 50 percent of its value.