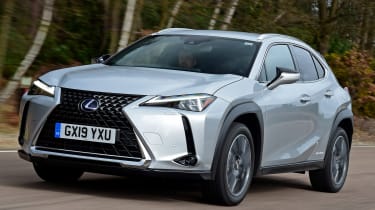 If you do plenty of town driving and a compact SUV appeals to you, then the Lexus UX makes a strong case for itself. It’s easy to drive, rides and handles impressively and its electric-only running for short bursts makes it frugal and refined around town. It’s not without its flaws, however: infotainment and practicality lag well behind rivals, and fuel consumption at motorway speeds disappoints. Top spec models are extremely pricey, too, so we’d recommend sticking to the lower trim levels.

The new car market’s trend towards SUVs continues to gather pace, and the latest example comes in the distinctive shape of Lexus’s latest release, the UX. The brand’s compact BMW X2 and Audi Q2 rival looks set to poach sales from the ageing CT hatchback, if not directly replacing it altogether.

Lexus says that the UX is aimed at “modern urban motorists”. As the smallest of the brand’s three SUVs, and equipped with a petrol/electric hybrid system, it seems like a perfect candidate for town driving. But is it worth considering over its more established rivals?

The UX is the first Lexus to use Toyota's GA-C platform, the same one used by the current Prius, new Corolla and the car most closely related in terms of size and shape to the UX, the C-HR. 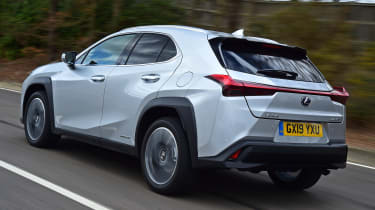 Under the skin, the UX’s hybrid system consists of a 2.0-litre petrol engine and battery assistance: front-wheel drive models get an electric motor up front, while ‘E-Four’ versions add a second to drive the rear axle.

The result is a maximum system output of 179bhp, and its 8.5-second 0-62mph time places performance on a par with the 1.5-litre turbo petrol Audi Q2. However, the electric motors make it feel much more sprightly than the Audi over the first few feet - perfect for darting in and out of gaps in traffic.

The petrol engine and electric motors have their own torque peaks - 190Nm for the combustion engine, 202Nm for the front E motor and 55Nm the one in the rear on 4x4 cars - but they don’t all arrive simultaneously, so Toyota doesn’t quote a combined figure.

As with the vast majority of the Toyota/Lexus hybrid family, drive is transferred to the road through a CVT automatic gearbox. While efficient, in the past this has come at the expense of refinement, causing the revs to rise unnaturally and noisily compared to a conventional automatic gearbox. The good news is that this is no longer an issue in the UX. There’s a little drone if you listen hard, but for the most part the combustion engine is so well isolated from the cabin that you don’t really notice.

It’s much more refined than the diesel alternatives other manufacturers offer in this class, especially when you consider that, for extended periods of coasting or gentle acceleration, the UX runs in hushed EV mode. It could be even more hushed, were it not for the fact that road noise isn’t particularly well isolated from the cabin. Ride comfort impresses overall, but at lower speeds the UX can jiggle around over smaller bumps.

That slight fidget is easy enough to forgive however, because the UX makes up for it in other areas. All of the cars based on the GA-C platform we’ve driven so far feel really engaging to drive, and the UX is no different. It’s more enjoyable from behind the wheel than the Q2 - if not quite up to the standards of the BMW X2 - and possesses a chassis that feels both secure and adjustable. The steering doesn’t have a huge amount of feel, but the weighing, consistency and precision are spot on. 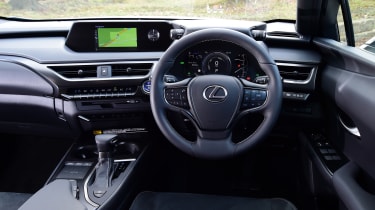 Interior design is another area where Lexus traditionally scores highly, and the UX’s modern, simple look is another hit overall. The only minor gripe is with the row of piano-like switches for the air conditioning system. They’re similar to what you get in a Peugeot 3008, but not quite as nice to look at or touch. That aside, however, the quality is excellent and the style is unlike anything else in the class.

The infotainment system in the UX is another example of where Lexus chooses to go its own way, but probably one where it should really copy its rivals. The mousepad-like touch interface, though improved, remains frustrating to use. A click wheel, a touchscreen, or both would improve things greatly. Neither Apple CarPlay or Android Auto are available, either.

While rear passenger space is acceptable, the boot is tiny. A high floor results in a volume of 320 litres - that’s 150 litres less than a BMW X2. Go for a four-wheel drive model, and the extra rear-mounted motor drops that figure to 283 litres. A Ford Fiesta offers 292 litres. 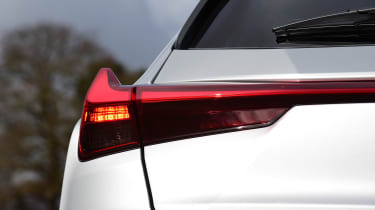 But what of mpg figures? Well, keep to driving around town and the UX will easily beat conventional combustion-powered rivals - espect mid-to-high fifties mpg in the right conditions. However, at a steady 70mph you’d be lucky to hit 40mpg, so if you cover higher mileages, a diesel would be a much better option. Company car users will appreciate the 23 percent Benefit-in-Kind rate, which is three groups lower than the cleanest petrol BMW X2.

UX prices start from £29,900, which is similar to the BMW too, and all models get adaptive cruise control, lane keeping assist and road sign recognition as standard. However, climb up the range and prices soon spiral: the top spec four wheel drive Takumi model costs £40,350. For that, you could get a top spec X2 xDrive20d M Sport X - a car which is quicker and potentially more frugal in the real world - and £1,210 change.