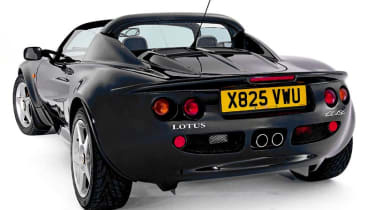 Believe it or not, you can now buy a Lotus Elise for less than £10,000! For that, you could have one of the best-handling cars ever on your driveway. Better still, surprising economy and reasonable running costs mean it shouldn't break the bank.

Using an advanced aluminium bonded chassis to save weight, the car is agile and follows company founder Colin Chapman's famous maxim of "Just add lightness" to the letter. Here we look at the original model, which featured an array of special editions during its four-year production span. Whichever you choose, they're all great to drive - and as capable on the track as on the road.

Generally, the Elise isn't afflicted with blown head gaskets, which are common to most other 1.8 K Series-engined cars. Do get an HPI check, though. Tricky on-the-limit handling often means crashed cars; chassis repair is a specialist task.

Ian Watson from Poole in Dorset has owned his 2001 Elise from new. He has nothing but praise for the car - but not always for the dealer network, which sometimes delivers patchy service.

"I've had a few minor niggles, all fixed under warranty but not without inconvenience," says Ian. "Shop around to save money on servicing, while sympathetic upgrades such as Series 2 suspension and Yokohama Advan tyres are worthwhile. As long as you go into Elise ownership with your eyes open, you won't be disappointed."

An unrivalled driving experience at a fair price and with reasonable reliability, an Elise is possible to live with every day. It's as comfortable on the track as it is blasting along B-roads, with economy of 30mpg-plus. There are few standard models left, but that's no bad thing; a couple of minor modifi-cations make this car even more enjoyable. Patchy dealer network is backed up by plenty of independent specialists.