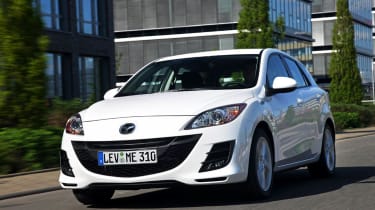 It’s difficult to call the Mazda3 i-stop an eco car in the truest sense. Fuel economy of 41.5mpg isn’t wholly impressive, and the fact that it’s only available in top-end Sport trim proves this car is aimed more at premium buyers than the cheap and frugal end of the market. The new 2.0-litre direct-injection engine is impressive however and exploits the 3’s dynamic abilities well. As a technical exercise it’s hard to fault the car, but we’ll have to wait until 2011 and the new generation of smaller direct-injection engines before i-stop starts making a real contribution to lowering emissions.

It’s the latest member of the stop-start club! Mazda has introduced its i-stop technology for the first time on it's Ford Focus rival the Mazda3, and the Japanese manufacturer claims it’s not only fastest and smoothest system of its kind in the world, but can reduce fuel consumption by up to 16 per cent.

The interface will be familiar to anyone who’s ever driven a stop-start equipped car. As you roll to a stop and engage neutral the engine cuts out, only to start back up as soon as you step on the clutch. It all sounds fairly straight forward, but Mazda’s engineers have gone that extra mile to make sure the process feels smoother and starts up twice as quickly as its nearest challenger, BMW.

Unlike its competitors, once the car comes to a halt the pistons don’t actually stop moving until all four are level – the perfect position for restarting. The start-up begins when fuel is injected directly into one cylinder and ignited, moving the piston down before the starter motor adds a small amount of extra momentum – initiating a quick restart of the engine and using less fuel than rivals which use combustion power alone.

But for all this to work, a direct-injection engine is needed. Which is why the car is fitted with an all-new 149bhp 2.0-litre DI powerplant derived from the 2.3-litre turbo unit found in the 3 MPS. Smaller-capacity engines in the range are not-yet fitted with direct-injection, although Mazda promises that its next-generation of petrol and diesel engines, available from 2011 will all get i-stop as standard.

It certainly does what Mazda claims, stopping the engine without significant vibration and firing it back up well before you have a chance to slot into first gear, but that doesn’t tell the whole story. There are a number of conditions when the system will deactivate altogether, or restart the engine early. Namely when its warming up, the climate control is on full blast or when the car stops on a steep hill – all of which means the engine is rarely off for the full time you’re stationary, bringing the real-world fuel-savings into question.

Rival: BMW 118i BMW’s Auto Start Stop function might not have the reaction times of Mazda’s i-stop, but through BMW’s award-winning Efficient Dynamics programme it’s been implemented across every 1-series and 3-series model with a four-cylinder engine and a manual transmission.