Japanese MPV gets a facelift, too. But what’s it like on road? 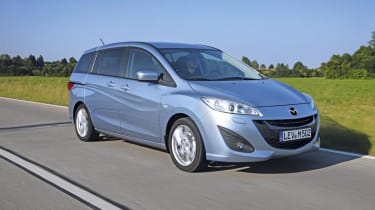 Families will love the 5’s clever seven-seat arrangement and twin sliding doors – after more than six years on the market, it’s still one of the most practical MPVs on sale. What’s more, drivers will be impressed by the sporty chassis and ample grip. There are compromises, though – the styling isn’t to everyone’s taste, and if you’re looking for out-and-out space, then there are better alternatives out there.

THE VW Touran isn’t the only compact MPV to get a thorough facelift – Mazda’s 5 has, too!

The people carrier has been styled using the firm’s Nagare design language – this means ‘flow’ in Japanese, and can be seen in the three ‘waves’ which adorn the side of the car. This concept doesn’t work very well on a boxy people carrier, though, so if the 5 doesn’t offer style, can it deliver substance?

It’s certainly practical. The middle bench features a centre seat that can be hidden away to create a passage to the rearmost ones, or to carry long items as well as four passengers. There’s plenty of room for five adults, too, but the rear seats are only really for small children. Leave them folded down and the load area is impressive at 426 litres, yet once they’re in place this figure plummets to 112 litres.

Twin sliding doors make access to the back easy, but the powered units – which can be operated by the driver – are available only on top-spec models. The interior itself is well laid out, and additional chrome inserts make it more pleasant to look at. The hard plastic that covers the dashboard does feel a little cheap, though.

Our car was powered by a new version of Mazda’s 1.8-litre petrol unit, which delivers 114bhp and a 0-62mph time of 12.4 seconds. While that’s 1.4 seconds slower than the 2.0-litre engine, this model actually feels just as quick. The only downside is that CO2 emissions of 168g/km are worse than the 2.0’s 159g/km figure because of the latter’s direct injection and stop-start system. The 1.8 is also less frugal, at 39.2mpg compared with 40.9mpg.

From January, buyers will be able to opt for a 1.6-litre turbodiesel. Its blend of low-down urge and 54.3mpg economy could make it the pick of the bunch.

On the road, the Mazda 5 does not boast the kind of involving drive you get from, say, the Ford S-MAX or C-MAX. However, it does provide a degree of fun on the road, and it’s relaxing, too, with a comfortable ride.

There’s plenty of grip and body control is also good, making the 5 agile in corners. But while improved steering means turn-in is sharp, it would need to offer more feedback to give a really involving drive.