The 1.8 diesel serves up cracking performance and impressive fuel economy, but the 2.0 petrol is good, too 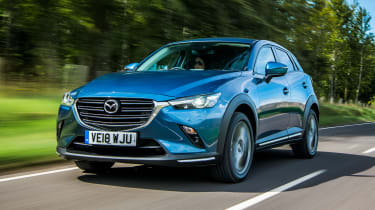 As with Mazda’s other models, the CX-3 uses the brand’s SkyActiv technology, with a stiff, lightweight bodyshell that provides sharp handling and a high level of safety. The CX-3 benefitted from a fairly minimal update over its predecessor in 2017 and 2018. It's still based on the SkyActiv platform and has an identical engine line-up, but there are some slight but important revisions. The car’s MacPherson strut front and torsion beam rear suspension were tweaked with subtly different damper rates in a bid to improve the quality of the ride, while a new calibration for the steering should ensure the CX-3 retains its fun-to-drive feel.

Another big addition in 2017 was Mazda’s G-Vectoring Control system, which is standard across the range. This slightly reduces engine torque once it senses the driver turning the steering wheel to put more weight on the front axle and improve dynamics.

The Mazda CX-3 is a great driver’s car, but it wasn't the most refined cruiser around. Mazda tried to rectify that with the 2018 update, which saw more sound deadening material added around the cabin and in the doors to boost refinement.

The chassis boasts a well judged suspension set-up that allows the car to float over bumps at higher speed. This emphasis on comfort doesn’t come at the expense of agility, andis surprising fun to drive.

The steering offers a fine balance of weight and communication, giving you a fair sense of the level of grip on offer – which is surprisingly high for a small SUV. You can turn the Mazda in at speed thanks to its decent body control, with the G-Vectoring subtly helping. It feels more natural than some systems where the torque vectoring by braking is quite intrusive, while there’s less roll than in many small crossovers. Despite this relatively rewarding dynamic edge, the damping is still plush and well controlled, tying the body down and offering enough absorption to soak up bumps mid-corner.

There are three engine choices for the CX-3. You can have either the 1.8 SkyActiv-D diesel or the 2.0 SkyActiv-G petrol in two power outputs. Both come with a six-speed manual gearbox, while the petrols can also be had with a six-speed auto. Front-wheel drive is standard on all models apart from the more powerful diesel, which is 4WD.

The 113bhp 1.5 SkyActiv-D replced the 1.5 diesel at the 2018 facelift, and it's an excellent all-rounder that doesn’t seem to suffer from the real-world fuel economy issues of the 2.2-litre version offered elsewhere in the Mazda range. It’s paired with a precise gearbox that gives a great connection with the car.

With 270Nm given low down at 1,600rpm, there’s lots of smooth torque, so the Mazda pulls well. When we tested the older 1.5 CX-3 against the more powerful Audi Q2 1.6 TDI at the track, it recorded a quicker 0-60mph time and proved faster during our in-gear tests, so the more powerful 1.8 should be faster still.

The SkyActiv badge shows the car has been put through Mazda’s weight loss regime, and the result is a kerbweight of around 1,370kg; add that to the punchy engine, and the CX-3 diesel flies along nicely. It’s not exactly a warm hatch, but it has a brisk 0-62mph time of 9.9 seconds. As with the 2.2-litre engine found in the likes of the CX-5, it has a low-friction design with a very low compression ratio for a diesel. That translates into a very smooth, free-revving engine that suppresses noise well.

Yet the diesel shouldn’t be the automatic choice in the CX-3. While a big, naturally aspirated petrol engine is hardly fashionable right now, the 2.0-litre SkyActiv-G is smooth, willing and not too bad on the fuel consumption front.

When we tested the 118bhp 2.0 Skyactiv-G CX-3 against the Audi Q2 1.0 TFSI and Peugeot 2008 1.2 PureTech, the Mazda's relative lack of torque highlighted the fact that it’s less flexible than the turbocharged engines. Although the Audi has a turbocharger to boost its torque, it actually produces 4Nm less than the Mazda’s 204Nm. However, the CX-3 reaches its peak at higher revs, which meant that its in-gear times in the higher ratios, where revs are lower, weren’t as quick as in either rival; it took 9.0 and 13.0 seconds to go from 50-70mph in fifth and sixth respectively.

This encourages you to rev the engine towards its 6,000rpm power peak, and it’s fun to do so because the naturally aspirated unit responds well and pulls sweetly above 3,000rpm. When you do, performance is impressive, and the CX-3’s 9.0-second 0-60mph time when we tested it meant it was the quickest car of the three. Select the next gear with the nicely weighted six-speed manual box and, combined with the car’s chassis, it involves you further still.