The Mazda CX-3 is the latest model from the brand to be updated for 2018. We take it for a spin to see what's changed... 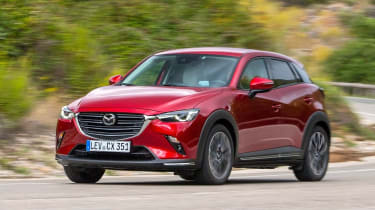 The Mazda CX-3 still caters to small crossover buyers after something well built and fun to drive. However, the old-school charm of the naturally aspirated engines won’t be to all tastes, and there are plenty of more spacious and practical rivals out there.

Mazda hasn’t been slacking this year. Though the brand’s most important model will arrive at the LA Motor Show in December with the reveal of an all-new Mazda 3, four members of Mazda’s line-up have been updated over the previous nine months.

Truth be told, the updates bestowed on those cars have been pretty minor with the exception of the more powerful MX-5, and it’s largely the same story here with the Mazda CX-3. That means lots of little changes to the design inside and out, plus revised steering, plus suspension and engine tweaks are the order of the day.

From outside you’ll struggle to pick out the differences between old and new. The only major change is the introduction of a new grille, while the pillars are finished in a darker shade to emphasise the car’s floating roofline. 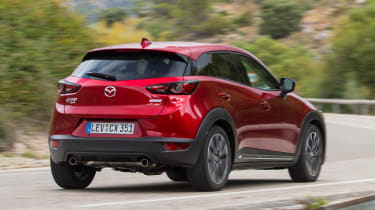 Step inside and more obvious changes creep in. The mechanical handbrake is gone, replaced by an electronic switch. The multimedia controller has been repositioned further up the centre console making it easier to reach, and a new padded armrest now sprouts between the driver and passenger seat. The rear middle seat now folds down to form an armrest with cupholders.

High-spec cars like ours are trimmed with a nice combination of leather and Alcantara. It’s a very pleasant environment, and overall interior quality impresses more than in a Volkswagen T-Roc. The infotainment system – now available with Apple CarPlay ­– and instrumentation, isn’t presented in the most modern fashion, however.

Buyers get the choice of a brand-new diesel engine, but it’s the 119bhp 2.0-litre petrol driven here that will remain the biggest seller. It’s not without change, mind, as internal revisions to the unit result in improved fuel economy of 45.5mpg. 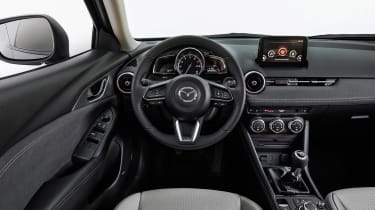 The free-revving, linear nature of the engine goes well with the CX-3’s well-judged chassis, steering and snappy six-speed manual gearbox, which combine to place the Mazda right at the front of the crossover pack for pure driving enjoyment. However, the quoted 206Nm of torque doesn’t quite pull the car up to speed from low down with the kind of urgency of the CX-3’s numerous turbocharged rivals.

Even though this updated car receives more sound deadening, uphill slogs and overtakes do get noisy; you need to approach the final third of the rev band to make good progress. Though max torque is delivered at 2,800rpm, peak power doesn’t arrive until 6,000rpm. It doesn’t lend itself too well to economical driving, and downsized three-cylinder turbo rivals may work out cheaper to run for most buyers.

Things are quiet enough on the motorway but the CX-3 still suffers from a fair bit of road and wind noise at speed, with no thanks to its sizable mirrors. Opt for the more powerful 2.0-litre equipped with an automatic gearbox and things regress; be prepared for plenty of engine roar seeping into the cabin if you opt for this set-up.

Mazda has tweaked the suspension, but by and large the CX-3 rides as it did before. It soaks up imperfections, all while displaying solid body control on twistier tarmac. Small inconsistencies can creep through, though, with some low-speed niggles and high-speed wobbles found either side of the car’s sweet spot. 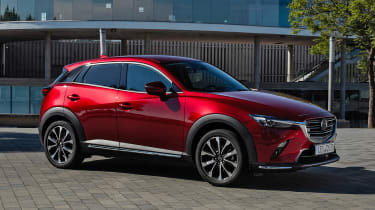 A 350-litre boot places it bang in the middle of the pack when it comes to practicality, but the rear seats remain a little tight for passengers, and less rakish rivals will serve up more room.

You may find that rivals come a little higher stocked too. In order to keep the price of the CX-3 competitive, the range topping Sport Nav+ model leaves safety kit like a driver attention alert system, rear cross traffic alert, adaptive LED headlights and blind spot monitoring on the options list. These form part of a £650 pack, while full leather upholstery is a £1,000 option limited to this model. UK cars aren’t available with the radar controlled adaptive cruise control system added to European models, either.