Could the CX-5 be the new king of the crossovers? We find out... 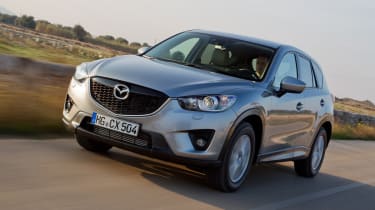 With the promise shown by this prototype, we can’t wait to drive the final production version of the CX-5. Practicality, ease of use and style are key in this class, and the car excels in all these areas. It’s good to drive, too, with some of the most powerful and efficient engines on the market. If Mazda can deliver on the promised retail price and equipment list, then there’s every reason to expect the CX-5 to lead the class.

Advertisement - Article continues below
Mazda is quite late joining the crossover party. Several well established models, such as the Nissan Qashqai and Volkswagen Tiguan, have made this one of the most fiercely contested sectors of the market. So Mazda needed to deliver something special, and that’s what it’s done with the new CX-5 – on paper at least.
The big news is the Skyactiv technology that helps make the CX-5 the lightest and most fuel-efficient car in its class. High-strength steel boosts rigidity while cutting weight, and an efficient 2.2-litre diesel has class-leading CO2 emissions of 119g/km. A 2.0-litre petrol engine is also available, with emissions as low as 139g/km – that’s the same as the least polluting diesel Tiguan.
Advertisement
Advertisement - Article continues below

There’s more to these engines than CO2 figures, though. The diesel feels unlike any other, thanks to a 5,200rpm red line and very smooth, quiet running. This is the most petrol-like four-cylinder diesel engine you’ll find on the market.
Advertisement - Article continues below
Mazda offers a choice of  148bhp and 172bhp diesels alongside the 163bhp petrol engine. The latter two can be specified with four-wheel drive, but the lower-powered diesel is only available as a front-wheel-drive model.
However, if you don’t need four-wheel drive, then that entry-level engine is the pick of the range, with fantastic refinement and enough power to take the CX-5 from 0-62mph in only 9.2 seconds.
It’s incredibly cheap to run, too, returning 62.8mpg, while that ultra-low 119g/km CO2 figure means road tax is free for the first year. Figures for the 172bhp diesel haven’t been released yet, but should be similar, while the petrol car claims 47.1mpg.
Yet the CX-5 isn’t just a class leader for economy – it’s also the most practical crossover. The 503-litre boot is unmatched in the class, while the clever rear seats fold flat into the floor at the touch of a button to create a huge 1,603-litre load area. Rear passengers are also treated to the most legroom in this class.
Advertisement - Article continues below
Advertisement
Advertisement - Article continues below
Elsewhere in the cabin, Mazda is promising a big improvement in quality over its other products. The car we drove was a hand-built prototype, so it didn’t have a production-ready interior, but the soft dash materials showed some real promise.
Handling is typically sharp for a Mazda, with weighty steering that’s responsive but still seems to need tuning – it felt a little inconsistent at times.
Body roll is well controlled, which allows the CX-5 to move quickly along twisty roads. The manual gearbox is supposed to evoke the short, snappy shift of the MX-5 sports car, and it does a surprisingly good job.
We tested the CX-5 on some very rough roads. Despite feeling firm, it coped well, soaking up most of the lumps and bumps. Mazda will offer 17-inch and 19-inch alloy wheels – we found the bigger wheels made the ride a bit more jittery.
Mazda’s Qashqai rival isn’t on sale in the UK until April, so prices have yet to be announced. We’ve been told to expect a figure  of around £22,000, which should include sat-nav and a host of active safety systems, such as a blind-spot monitor, lane-keep assist and an automatic city braking system.
Even though this was only a pre-production version, it’s obvious that the CX-5 has what it takes to trouble the very best.
Advertisement
Share this on TwitterShare this on FacebookEmail
Advertisement