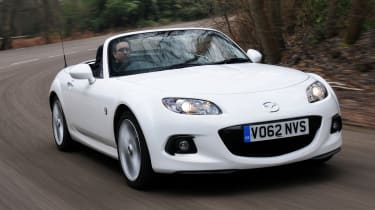 The Mazda MX-5 is the world's most popular two-seat sports car. Ever since it's launch 25 years ago, its balanced blend of performance, excellent value and handsome looks has ensured it's lasting success. Even though the third-generation NC model spent nine years in production it's still one of the best of its kind with rivals ranging from the MINI Roadster to the Audi TT and Peugeot RCZ.

The classic roadster shape of the original MX-5 has been retained, but Mazda has ensured its latest design philosophy shines through. The latest iteration received a facelift that brought in a new front bumper and redesigned grille. The MX-5 is available in traditional soft-top guise or as a hard-top Roadster Coupe. The folding metal roof of the Roadster Coupe, is well integrated within the MX-5’s compact frame and manages to keep the rain out without adding too much weight.

The MX-5 is offered in three main specification levels - the entry level SE, the Sport Tech and the recently-introduced 25th Anniversary Edition. The MX-5 is available with a choice of 1.8-litre or 2.0-litre petrol engines. Neither unit delivers a huge hit of performance but they’re enough to let drivers get the most out of the MX-5’s balanced and involving rear-wheel-drive chassis. The 25th Anniversary Edition was intoruced to celebrate the car's milestone, with production limited to just 1,000 models. It's based on top-spec Sport Tech Nav but is fitted with eye-catching desing tweaks and extra kit inside.

For the more enthusiastic driver, there is also an MX-5 GT, which has been tweaked by Mazda's racing partner Jota and a BBR version.

While it may be getting on a bit now, the Mazda MX-5 remains one of the best drivers' cars on the market, with superb handling and spirited drive.

Like the previous two generations of the Mazda MX-5, the Mk3 NC provides great driver enjoyment thanks to its sharp handling and quick steering.

The 124bhp 1.8-litre MX-5 is mated to a five-speed manual gearbox, whereas the 158bhp 2.0-litre petrol variants can either be specced in six-speed manual or automatic guise - the latter coming with steering wheel mounted paddles. 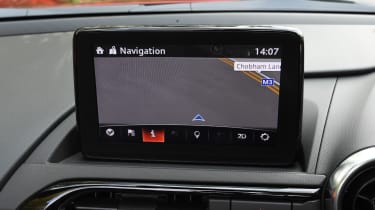 The 25th Anniversary Limited Edition model is fitted with the most powerful 158bhp 2.0-litre engine and six-speed manual gearbox. It's the best combination available in the MX-5 with enough grunt and a short and sharp gearchange. It may not be the most powerful roadster available but it's lightweight and rear-drive setup makes it one of the most driver focused. Delicate steering and a raspy exhaust note add to the occasion, but you have to work the engine to get the best out of it. All of the power is at the top of the rev range but its free-revving natyre means the power is always accessible.

Given its moderately sized engines, the Mazda MX-5 Mk3 is reasonable in terms of its returned fuel economy.

The Mazda MX-5 fitted with the Powershift automatic gearbox is somewhat disappointing in its combined cycle and CO2 emissions, with 35.3mpg and 188g/km respectively.

Another advantage that the MX-5 has in terms of running costs is that resale values are relatively strong. Reasonable prices from new and the MX-5’s popularity as a used car mean you’ll never loose a fortune on an MX-5. Parts should also be quite affordable.

First launched in 2005, the NC Mazda MX-5 received a facelift in 2008 to incorporate a restyled front end that took design cues from other models in the Mazda range. The changes included a larger grille, as well as new head and fog lights. The interior also received an upgrade, with Mazda giving the MX-5 redesigned graphics for the instruments.

Mazda has also been generous when it comes to providing the MX-5 with standard equipment, as all versions get climate control, electric windows and remote central locking with boot release. Plus, all models apart from the SE get cruise control as standard.

On the outside, Mazda has been equally as generous with the exterior of the MX-5. The entry level SE gets 16-inch alloy wheels as standard, while higher trim levels get 17-inch alloys.

Given its sporting credentials, it shouldn't come as a surprise that Mazda didn't aim for practicality when it was designing the MX-5. While the 150-litre boot is only good for a few bags of shopping or a couple of rucksacks, Mazda gives the MX-5 a decent amount of storage in the cabin thanks to various cubby holes and compartments. 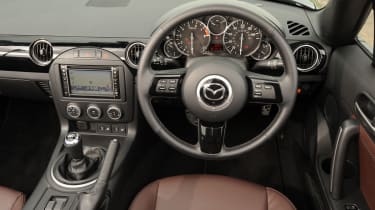 You only get four cup-holders but remember this is two-seater sports car, so it's more than enough. Taller drivers may also find getting behind the wheel a bit of a squeeze as the steering wheel doesn't adjust for reach.

The Mazda MX-5 Mk3 wasn't subjected to the rigours of the Euro NCAP crash safety tests. Having said that, the Mk2 was tested back in 2002, and received a four-star rating. It gave a well-balanced performance, but questions were raised concerning passenger safety, especially from frontal impacts.

The entry-level model doesn't come with electronic stability control (ESP) as standard, either.

Mazda came 8th out of 33 manufacturers in our 2014 Driver Power survey, beating the likes of BMW, Audi, VW and Mercedes. The MX-5 itself ranked at a disappointing 96th place, however, a big step down from the 4th place it made in 2013.