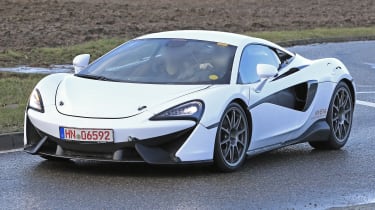 These spy shots reveal that McLaren is busy testing its replacement for the 570S. The British brand will overhaul its entry-level Sports Series range later this year, and the big news is that it’s going hybrid.

The production model won’t look like this – our spy shots show a test mule wearing the bodywork of the outgoing McLaren 570S. The finished product will sport an all-new exterior and interior design, which is being kept under wraps for now.

However, there are a few visible changes between this test car and the standard McLaren 570S, including a pair of extended side skirts and a rudimentary high-mount exhaust system. The latter adjustment suggests this mule is being powered by an all-new powertrain – along with the bright orange “hybrid” sticker fixed to this development vehicle’s rear window.

The push towards hybrid drive forms part of McLaren’s £1.2 billion Track 25 business plan, which will see 18 new petrol-hybrid powered McLarens launched by 2025. The company says it is currently evaluating a new high-power battery pack for a full EV setup that will offer a claimed 30 minutes of electric range around a race track.

Are you looking forward to McLaren’s new Sports Series supercar range? Let us know in the comments section below…

The new McLaren Elva has been shown off in a retro-inspired livery, while the novel wind deflector system has been explained in a Facebook video
Visit/mclaren/765lt 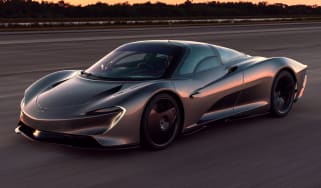 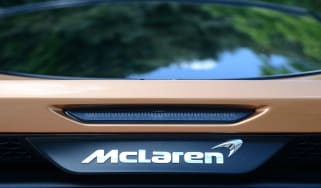