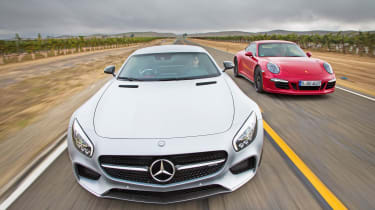 AMG now has a sports car to rival the very best in the business. The GT’s stunning looks, upmarket cabin and powerful V8 engine are all highlights. However, it’s the handling that sets it apart. A truly athletic car, with a dynamism not seen before in a Mercedes sports car, the new GT S is a great looking, beautifully engineered and accomplished rival for the 911. But it doesn’t take long at the wheel of the Carrera GTS to realise the 911 is still at the top of its game. Porsche has hit the sweet spot in the range. It drives harder and sharper than the S on which it’s based, yet offers no compromises. We’ll reserve final judgement on a winner until we can test them in the UK, but if you’re on the waiting list for either, you won’t be disappointed when your car is delivered.

The Mercedes-AMG GT will be one of 2015’s most exciting new cars. But how does it compare to arguably the best sports car in the world – the Porsche 911? To make that decision even tougher, Porsche has introduced the 911 GTS. So during our first drive of the AMG GT, we headed across California to line up an exclusive head-to-head.

Powered by a new twin-turbo 4.0-litre V8, the GT isn’t a direct replacement for the larger, more expensive gullwinged SLS supercar. Instead, with two versions to choose from – the 456bhp GT and the 503bhp GT S – it promises to battle the 911 by being the most dynamic sports car ever to wear the three-pointed star. There’s a hint of its gullwinged predecessor, but the new GT’s delicate surfaces mean it’s far sleeker. 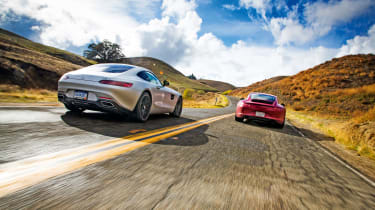 The arched roof flows smoothly into the broad but athletic tail, while at the front, a traditional long AMG bonnet and side vents stand out, alongside the low nose and swept-back LED headlights. Spend time looking at the AMG GT and you’ll marvel at the beautiful detailing in its lines, and on the evidence of our time with the car, the first owners in the UK are going to attract plenty of attention.

With the Mercedes being all-new and so stunning, it’s hard for the familiar Porsche to match its head-turning appeal. But the new GTS gives the 911’s timeless look a more purposeful stance with visual upgrades, such as 20-inch centre-locking gloss black alloys, smoked light clusters and black exhaust pipes. The slatted rear engine cover is black, too, and it shares the same wide body as Carrera 4 models. Overall, we’d say it’s the best looking 911 this side of the GT3 or Targa.

Inside the 911, you get the usual Porsche cabin, which is faultlessly put together and logically laid out. The traditional overlapping circular dials look fantastic and the driving position is perfect. All the switchgear is first-class, while trim and material quality is largely a match for the Mercedes’.

The GTS gets branded sports seats and swathes of Alcantara, but for some people the AMG GT’s cabin will still provide the bigger wow factor.

The sweeping dash features a quartet of circular air vents and Mercedes’ tablet-style COMAND screen, while in a nod to the V8 engine, the transmission tunnel has eight buttons laid out in an expanding V formation. First-rate materials and switchgear abound, and the lovely Alcantara-trimmed flat-bottomed wheel is a delight. 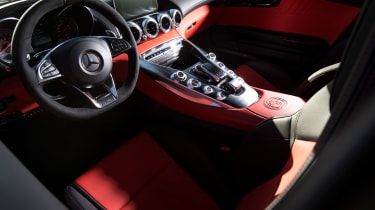 You sit low in the cabin, so there’s plenty of headroom, but overall, space is tighter than in the 911, and we found the sport seats’ slightly flat bases became a little uncomfortable over a long journey. Plus, the chunky A-pillars cause a few blind spots.

Don’t be fooled by the long nose, though. With its 4.0-litre twin-turbo V8 mounted low down and behind the front wheels, this is no lazy GT car.

Click to page 2 for the full driving verdict on the AMG GT and 911 GTS.