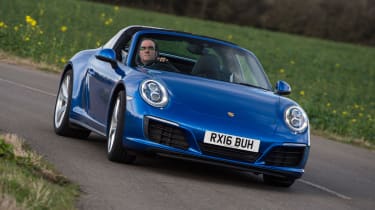 The original Porsche 911 Targa debuted at the 1965 Frankfurt Motor Show before going on sale in 1967. The car, which is named after the classic Targa Florio road race in Italy, has been part of the Porsche model range ever since. While the first car had a manually removable top that stowed in the 911's front boot, later versions, such as the 993, 996 and 997 models, weren't much more than 911s with extra large sunroofs.

But for the latest 991-generation, Porsche went back to the look of the 1965 original, with a silver roll hoop and large wraparound rear screen, although the roof now stows fully electrically at the press of a button.

Now the Targa has been brought into line with the rest of the 911 Carrera range with the introduction of a new 3.0-litre turbo flat-six in two different power outputs. They're designed to promote efficiency without sacrificing performance, while opening the Targa roof allows you to experience the subtle turbo whistle that now accompanies the flat-six soundtrack.

Unlike the 911 Cabriolet, the Targa is only available in 4 and 4S four-wheel-drive variants, although it commands the same price as the 4 and 4S Cabriolet, so the only choice you have to make is whether you want a full drop-top, or like the appeal of the Targa roof.

Heavier 911 Targa isn't quite as sharp as a 911 coupe to drive, but it's still thrilling

The extra weight of the folding roof mechanism means the Targa weighs 110kg more than the Coupe and 40kg more than the Cabriolet, so it’s definitely not the sharpest 911 you can buy. Nevertheless, if you spec a Targa 4S with PDK and Sport Chrono Plus, it will be able to hit 0-62mph in 4.3 seconds – that’s a tenth faster than the naturally aspirated model.

The figures aren’t wildly different, then, but you’ll notice that below about 4,000rpm the acceleration isn’t quite as rapid as what you’ll find in a 911 Coupe, and the transition from naturally aspirated power to turbos hasn't blighted the car with turbo lag,a s throttle response is instant in any gear, and only really laboured at low revs in sixth. 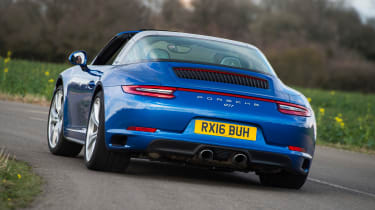 Porsche has deliberately set out to make the Targa a little softer and you can feel it over rough roads, where it soaks up bumps much more comfortably than the Coupe. That slightly softer chassis and weight increase also means that final edge of sharpness that you find in other 911s is missing here.

It’s not bad to drive by any means – the steering, brakes and handling are all fantastic – but it’s just not the purest 911 you can buy.

This 3.0-litre turbocharged 911 Targa is the most efficient yet, and it brings surprisingly reasonable running costs along with its supercar performance. In the 4S, the PDK-equipped cars are cleanest, boasting CO2 emissions of 184g/km (down from 214g/km in its predecessor) and economy of 35.3mpg (up from 30.7mpg). Go for the seven-speed manual instead and those figures drop to 31.4mpg and 208g/km, but that's still better than the old 3.8-litre model at 28.2mpg and 237g/km. 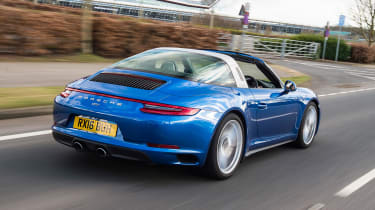 The Targa 4 is marginally better on running costs, with the PDK-equipped model boasting 35.8mpg. The 4S sits in insurance group 49, which is only one off the highest rating possible. Less powerful models are slightly cheaper to insure.

For the previous three generations of 911, there hasn’t been much differentiation between Coupe and Targa models, but this latest version has a character all of its own. The brushed metal rollover hoop draws inspiration from the very first Targa, and incorporates a stylish wraparound rear screen. Since only four-wheel-drive models are available, you’ll notice that you get the light-bar running across the engine cover and wheelarches that stick out 22mm more than on rear-wheel-drive 911s. 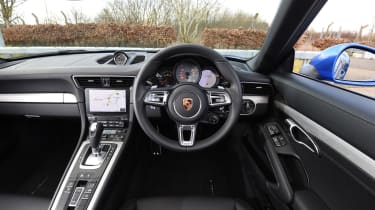 The 4S gets 20-inch alloy wheels, where the 4 gets 19s, but both come fitted with leather upholstery, sports seats and bi-xenon headlights, while the most recent model update adding a new sat-nav system as standard to the range.

The 991-generation 911 is Porsche's most practical yet, but it’s worth remembering that this car is a sports car first and foremost. You get 125 litres of storage under the bonnet, which is big enough for a couple of small suitcases, but the rear end is taken up by the engine and roof mechanism, so that's all of the storage you get beyond the cabin.

What you’ll probably end up doing is just using the rear seats as an extension of the boot. That’s because you can forget about getting adults back there but small children should be absolutely fine for short journeys. The seat backs do fold to create a flat load area, but everything is exposed under the large rear window. 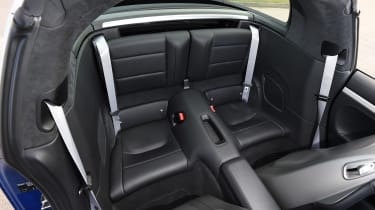 This Targa version has a complicated roof mechanism that involves the rear windscreen moving backwards, but Porsche uses the standard-fit parking sensors to ensure it’s not going to hit anything as it moves. Unlike the 911 Cabriolet, the Targa's roof only works when you're stopped. Having that wraparound rear screen means that visibility out the back is actually pretty good.

Despite the high-profile fire issues with the Porsche 911 GT3, Porsche generally has an excellent reputation for reliability. It helps that the Targa engines and chassis components are used elsewhere in the Porsche range, with very few issues reported.

In terms of safety, this is where the Targa comes in to its own – after all, the 1965 original was designed to bypass potentially stringent USA rollover regulations on convertibles. That aluminium bar provides great peace-of-mind when you’re driving, unlike the system that the Cabriolet uses, which relies on a pair of pop-up rollover beams. 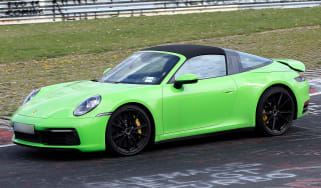 The latest Porsche 911 Targa has been caught on camera, completely undisguised, undergoing its handling assessment around the Nurburgring
Visit/porsche/911/99934/porsche-911-targa-gts-2017-review 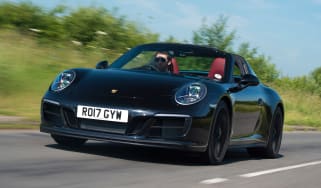 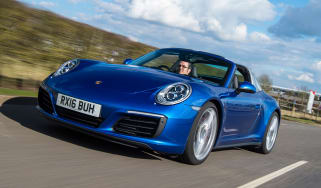 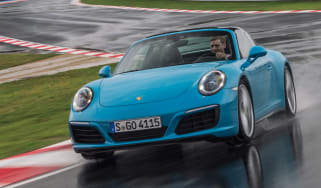 New Targa 4 is still just as stylish but now more usable than ever, thanks to a new 3.0-litre turbo engine
Visit/porsche/911/91300/porsche-911-targa-4-gts-review 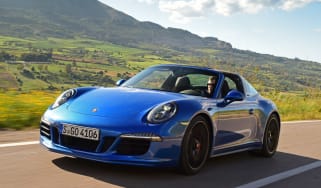 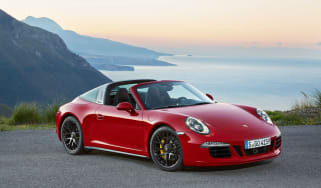 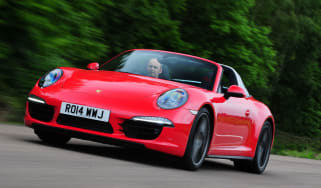 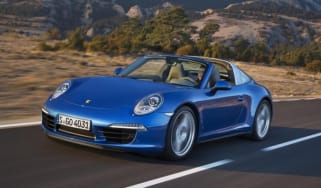 The Targa has been part of the Porsche 911 family since 1965, but is relatively unloved. Can this new version change perceptions?
Visit/porsche/911/85179/cool-new-porsche-911-targa-revealed-detroit 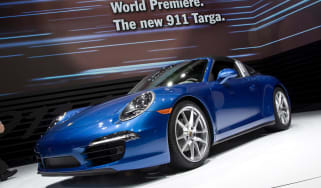