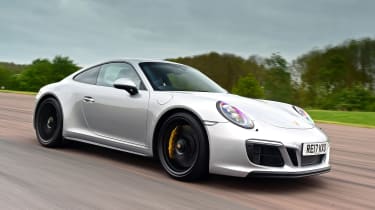 The Porsche 911 GTS’s niche is the way it combines all the incredible usability for which the standard 911 is famous, but with even more driver focus. A rear-wheel-drive manual might be more involving than this four-wheel-drive PDK auto model, but whatever the specification, the GTS goads you into driving harder and faster without sacrificing cruising comfort or refinement. It’s the perfect halfway house between a standard Carrera and a track-focused GT3.

We’ve already sampled the Porsche 911 GTS in early left-hand-drive form, but now we’ve got our hands on a right-hand-drive model to see if it has what it takes to successfully bridge the gap between the standard 911 Carrera and the hardcore, track-focused GT3.

As with the rest of the facelifted 991.2 range, the GTS is now turbocharged. That means its 3.0-litre flat-six is force-fed by two turbos – but they’re new compared with those on the entry-level Carreras. This ups power and torque to 444bhp and 550Nm respectively, the latter available from as low as 2,150rpm right the way through to 5,000rpm. In four-wheel-drive guise with Porsche’s seven-speed dual-clutch PDK transmission, as tested here, this makes the car devastatingly effective.

Supreme traction lets you make the most of what the engine has to offer, but this also highlights one of the car’s downsides. The unit doesn’t have the same prompt and solid response as its naturally aspirated predecessor, and it exhibits a softer edge as you wait momentarily for the boost to build. 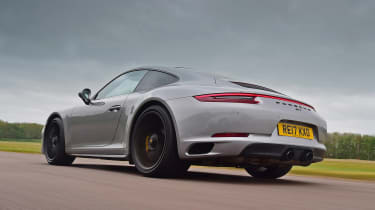 It quickly finds its stride, however, and you’ll need only 3.6 seconds to sprint from 0-62mph thanks to the PDK’s launch control. And with a top speed of 191mph, there are no complaints about the performance – especially the explosive mid-range grunt.

However, the turbo does rob the GTS of a little character. Now that all 911s bar the range-topping GT3 are turbocharged, there’s less separation between models in terms of engine feel. The GTS still revs with a typical 911 howl with the standard sports exhaust engaged, but it’s the chassis that marks out this model from lesser 911s and its more focused cousins further up the range.

For your £103,711, this Carrera 4 GTS gets standard Porsche Adaptive Suspension Management, complementing the 20mm drop in ride height compared with a normal Carrera. PDK cars also get Porsche Torque Vectoring Plus to improve agility, while if you want even sharper direction changes you can specify the brand’s rear-wheel steering for £1,592. The system allows the back wheels to turn in the opposite direction to the fronts at low speeds, to improve the car’s turning circle and therefore usability and agility. However, at higher speeds the rear wheels move in the same direction as the fronts to aid stability.

It’s at the top end where the adaptive dampers come in. In its Normal setting the GTS has a taut ride, but with plenty of fluidity and composure given that it sits on 20-inch centre-lock wheels. This setting is a beautiful compromise and feels like all you’ll ever need on the road, balancing a more focused attitude while still retaining plenty of comfort. 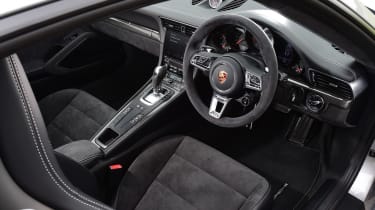 The Sport setting firms things up, with the dampers controlling body and wheel movement with extra attention. It’s usable, but the reduction of slack in the dampers means more vertical motion is transferred through to the cabin, so you’ll pogo up and down a little more on undulating or bumpy roads. As with all 911s, however, the GTS never feels like a handful, allowing you to exploit the car’s rear-engined bias.

On a track the extra tautness is welcome, giving an even more direct response to your inputs and extra aggression in direction changes. It’s here you can explore the GTS’s lovely balance, too. The four-wheel drive is incredibly clever, allowing you to either maximise the traction on offer and fire out of corners at a rate that would embarrass some mid-engined supercars, or indulge in a graceful slide that will have onlookers gawping at your ability. Keep it neat and tidy, and cornering grip is immense.

Our test car also had Porsche’s £6,018 ceramic-composite brakes, highlighted by the signature yellow finish to the calipers. While these offer fade-free stopping power that will see you straining against your seatbelt, for most the standard steel discs offer just as much performance and feel. 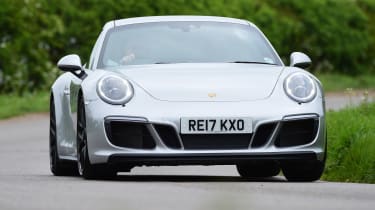 Yet the GTS is not only a weekend vehicle. Practicality isn’t such a big part of the buying decision with a sports car or supercar, but thanks to the 911’s established 2+2 layout, a decent-sized boot and genuinely good visibility, it’s incredibly usable for a model of its type. That said, while the rear has room for small children, tall kids will struggle.

Alongside this – and just like in the other facelifted 911s – the new infotainment system and tweaked styling make the GTS even more appealing. Sat-nav and Apple CarPlay are both included as standard, too.