The CLA promises decent fuel economy in everyday use, and should hold on to its value reasonably well 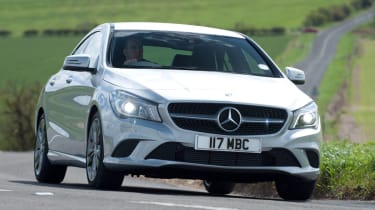 It’s not surprising that the most efficient version of the Mercedes CLA is diesel-powered, and our pick of the range for running costs overall is the CLA 220d. This DCT auto-equipped model claims 67.3mpg fuel economy from its 2.1-litre engine and emissions of 106g/km. 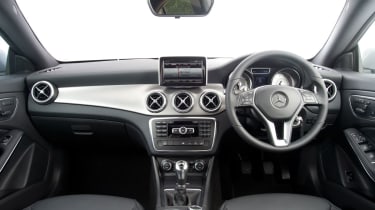 The 122bhp 1.6-litre petrol engine in the CLA 180 emits 128g/km of CO2 and promises official 51.4mpg economy when fitted with the six-speed manual gearbox. Buyers are looking at improved figures of 124g/km and 52.3mpg with the automatic box.

It’s not surprising that the 2.0-litre petrol engine in the performance-focused CLA 250 AMG and hot Mercedes-AMG CLA 45 is the least efficient in the range. The CLA 250 AMG claims fuel economy of 42.2mpg and emissions of 156g/km, while adding the DCT auto results in figures of 45.6mpg and 143g/km. Add 4MATIC four-wheel drive, and economy is claimed at 41.5mpg, while emissions are 160g/km. Even though the AMG 45 model has sizzling straight-line pace, its figures of 40.9mpg and 162g/km aren't much worse than the CLA 250 AMG 4MATIC. That's on 18-inch wheels, add the 19-inch rims and economy drops to 38.7mpg and emissions rise to 171g/km.

The Mercedes CLA range starts at around £24,000, but you don’t get a lot of kit for the money, and the price will quickly start to rise as you add options.

Depending on spec, the line-up kicks off in insurance groups 20 to 24 for the entry-level Mercedes CLA 180 petrol models. The CLA 200d diesel sits in around group 24, with the CLA 220d in group 27.

If you have to ask how much it costs to insure a Mercedes-AMG CLA 45, you probably can’t afford the premiums for this high-performance group 45 rocketship.

Insurance premiums are likely to start off lower for the Audi A3, as basic versions feature smaller engines, but like-for-like models are roughly in the same ballpark as the Mercedes. 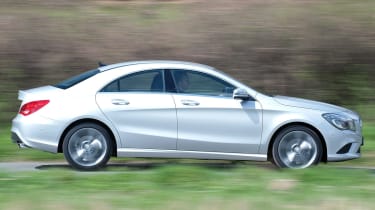 The appeal of Mercedes’ three-pointed star badge should ensure the CLA resists depreciation reasonably well. Our experts predict that diesel models are likely to hold on to their value best, while those with an automatic transmission will retain more of their price than manual versions.