The big Mercedes E 400 d Estate offers great pace and efficiency, but it comes at a cost 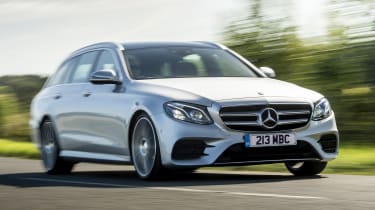 If you have the budget and don’t want to jump on the SUV bandwagon, the Mercedes E 400 d estate could be the ultimate family car. It’s supremely comfortable, effortlessly quick and beautifully equipped. However, at over £56,000 it’s also a long way from being cheap; the more sensible and affordable E 220 d will be perfectly good enough for most people.

The latest Mercedes E-Class is a known quantity – it’s been around for a couple of years now and won plaudits for its impeccable build quality, luxurious cabin and best-in-class practicality.

Its vast array of engine options also means there’s something for everyone, from efficient plug-in hybrids to high-power AMG versions. This latest E 400 d holds the middle ground between the two, serving up decent fuel economy and punchy performance – on paper at least.

Under the bonnet sits a 3.0-litre six-cylinder turbodiesel that develops 336bhp and a whopping 700Nm of torque. It’s linked to Mercedes’ tried-and-tested nine-speed automatic gearbox and 4MATIC four-wheel-drive system as standard. The company says it will manage more than 46mpg and cover the 0-62mph sprint in a hot hatch-troubling 5.1 seconds. 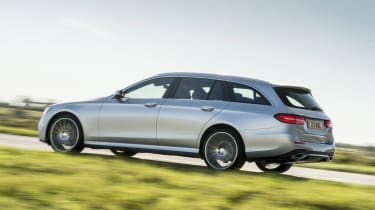 The engine is near-silent at idle and is so well isolated from the cabin on the move it’s barely audible. The gearbox plays a big role in this, shifting its way up through the ratios at the earliest possible opportunity to keep everything as calm and serene as possible.

Squeeze the throttle and the engine pulls hard from as low as 1,200rpm – the big estate will happily plod along at 30mph in sixth gear and accelerate all the way up to motorway speeds with minimal fuss. You don’t need to extend it beyond 3,000rpm because of the effortless delivery. Add in the supple ride quality and the E 400 d is simply one of the most relaxing and refined cars in which to cover long distances.

And because the engine is rarely strained it’s very easy to get close to the claimed fuel economy figure – after several hundred miles, which included a mix of city-centre driving and long motorway runs, we managed just shy of 44mpg. That’s almost on par with what you’d get from a lesser-powered, four-cylinder E 220 d. However, because of the E 400 d’s CO2 emissions of 161g/km, you’ll have to pay out £820 for the car’s first year of VED.

Despite its racy AMG Line trim (the only spec the E 400 d is available in) and punchy performance, this big, comfortable estate is a car far more suited to pottering around city streets and devouring long motorway miles than it is on a winding B-road. The standard 4MATIC all-wheel drive means you’re never short on traction or surefootedness at speed, but you’re always aware of the car’s mass during cornering, when the soft suspension allows the body to lurch over to the side. However, the car’s whole effortless and serene nature rarely encourages you to drive in such a way. 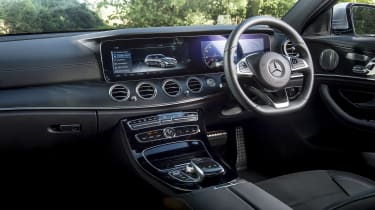 One optional extra that may be worth adding if you’re doing lots of motorway miles is Mercedes’ Driving Assistance Plus package. It’s not cheap, at £1,695, but the semi-autonomous driving function is one of the best around, helping the car to maintain a safe distance from the vehicle in front and keeping the car perfectly in lane even through high-speed motorway bends.

And because it’s an E-Class Estate, the E 400 d comes with best-in-class practicality as standard. The cavernous 640-litre boot is bigger than that of any other estate car in this class, while dropping the rear bench frees up a total of 1,820 litres of space.