We drive the all-new Mercedes E 220d in the UK as it takes the fight to the Audi A6, Jaguar XF and BMW 5 Series 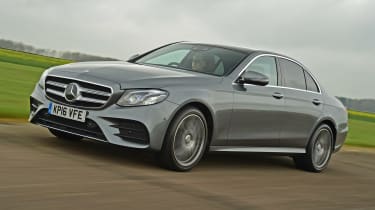 The new Mercedes E-Class is a plush, luxurious executive that performs best as a comfortable cruiser, with a smooth shifting gearbox and relatively refined interior. The AMG Line model looks great, although the downsides are a firm edge to the ride without the benefit of sharper handling, and higher company car costs. If you're looking at the bottom line, the SE version, which is still pretty well equipped, could be a better option.

The all-new Mercedes E-Class has landed in the UK with a modest model line-up at launch. There's a choice of two diesel engines, the E 220d and E 350d, while the basic trim line-up is SE and AMG Line. Here we try the smaller engine in the higher spec trim on UK roads for the first time.

From the outside, the angular look of the old E-Class has been replaced by plenty of curves that give the new model a look that will make it difficult to distinguish from the smaller C-Class. Only the car's large dimensions give it away, although the new model seems smaller than the car it replaces. 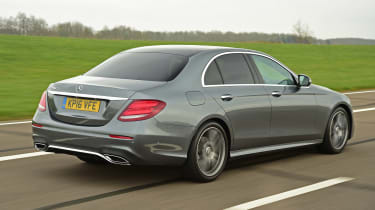 Step inside, and the new E-Class gets an interior inspired by the S-Class limousine. Our car featured a raft of options, which included the £495 12.3-inch cockpit display, that replaces the standard dials with a high-resolution TFT screen. This is navigated through via the touch-sensitive steering wheel controls that are standard on AMG Line models, which take a bit of getting used to, while the dashtop screen is controlled via the Comand rotary selector on the centre console.

Overall quality is excellent on board, with plenty of plush leather-effect trim and metal switches adding to the quality feel, while familiar Mercedes touches such as the column mounted gearlever and all-in-one indicator and wiper stalk remain intact.

Fire up the new 2.0-litre diesel in the E 220d, and the unit is surprisingly rattly. It's no quieter than the engine it replaces, as Merc's engineers have focused on the diesel's efficiency rather than its refinement. However, the engine is relatively muted from the cabin, and the standard nine-speed auto gearbox manages the shifts to prevent too much noise entering the cabin. 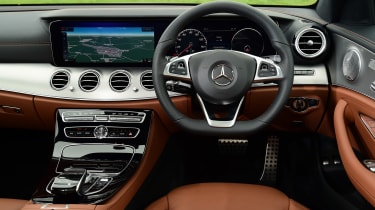 Performance is impressive, with plenty of urge from low revs, while the 400Nm torque figure helps the E 220d sprint from 0-62mph in 7.3 seconds. The gearbox delivers smooth shifts, too, while you'll barely notice when the gearbox kicks down.

Unfortunately, while the AMG Line model looks good thanks to its sporty styling, big wheels and lowered suspension, the same underpinnings add a firmness to the ride that's impossible to dial out completely. Our car's air-suspension had three settings - Comfort, Sport and Sport+ - and while the suspension is relatively smooth in Comfort mode, the big wheels still send shudders and shakes through the cabin. On the motorway, Sport mode arguably offers the best compromise, because it dials out the floaty sensation of Comfort mode, but isn't quite as harsh as Sport+. 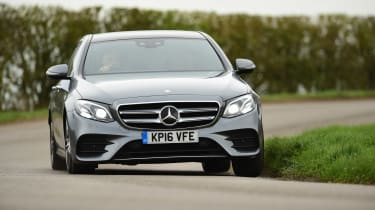 Head for a twisty road, and the E-Class isn't as focused a performer as the likes of the BMW 5 Series or Jaguar XF. The steering is very light and doesn't deliver much feedback, while the suspension struggles to contain the car's weight, with a wallowy ride and plenty of roll in the corners. And while the E-Class is a rear-drive saloon, it's set-up to deliver safe understeer as you approach the limits of grip.

Another penalty for the AMG Line trim is a rise in emissions from 102g/km for the SE model up to 112g/km. While that's still pretty impressive, it means company car users will face marginally bigger bills than for similar sport-spec rivals such as the Jaguar XF R-Sport or Audi A6 S line.