We drive the new range-topping Mercedes E-Class Cabriolet, ahead of its UK arrival in October 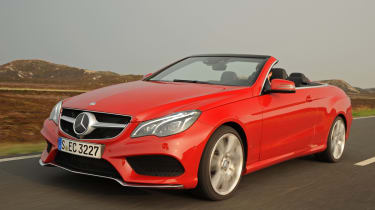 Mercedes has focused on all the right areas for this facelift. The E-Class Cabriolet was already one of the most comfortable and relaxing convertibles out there, and now it has been improved in all the ways it had begun to lag behind the competition. The updated styling makes it look completely fresh, while the new technology and a few updated engines improve its safety, ease-of-use and performance. One of the best four-seater cabriolets on the market has just got a little better.

The Mercedes E-Class Cabriolet has been facelifted, borrowing some of the updates from the recently tweaked saloon and estate variants. There’s also a new E400 variant, which replaces the E500 at the top of the UK line-up, and Auto Express has been behind the wheel.

The changes are already familiar from the more traditional members of the E-Class family, such as the more cohesive headlight design, the new single-bar grille and the LED rear lights. Importantly, the pontoon-style rear wheelarches remain, whereas they had been smoothed out for the saloon and estate.

The interior tweaks are even more subtle, with the gear selector moving from the centre console to a steering wheel-mounted stalk, some new brushed metal finishes and updated dials.

The Cabriolet’s top-down credentials are now better than ever thanks to the automatic AirCap, which drivers used to have to raise and lower manually. Now it’ll go up at 25mph, and almost completely stops buffeting even when you're driving at 60mph.

This new 328bhp engine is fantastic, too, although the big seller is still expected to be the E350 CDI V6 diesel. The E400 may be a tenth of a second slower from 0-62mph (with a time of 5.3 seconds) but it genuinely feels every bit as quick as the E500 it replaces. It delivers power just as consistently, too, despite the fact it’s turbocharged rather than naturally-aspirated.

It’s also an engine that fits with the E-Class Cabriolet’s character as a relaxed cruiser. It’s quiet and smooth, which helps complement the smooth ride and top-notch refinement but – as ever with this car – driving thrills aren’t top of the list.

There have been big changes to the amount of technology on offer, with a new Distronic Plus system able to steer, accelerate and brake you through traffic jams and a 360-degree camera to help parking. As standard there’s a Pre-Safe Plus system that can detect a rear end collision and apply the brakes hard to stop you ricocheting in to the car in front.

The new E-Class Cabriolet is available in two trim levels: SE and AMG Sport. Going for an entry-level SE model will cost an extra £2,095 over the old car, while going for AMG Sport means paying £2,435 more than you would have done for the old Sport model.

Those premiums may seem like a lot but Mercedes claims you get extra standard kit in the facelifted car, which actually adds up to more than the premium you’re paying. With that in mind, if you’re after one of the most comfortable, refined and hi-tech cabriolets on the market, then the E-Class is better than ever.