V6 diesel and AMG Sport trim is an enticing blend 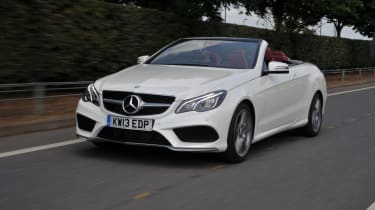 More of an accomplished cruiser than a proper sports car, the E350 is powerful and refined enough to keep most drivers entertained. The ride feels a little firm, but the high-quality interior and long kit list do go some way to justifying the hefty price.

We were very impressed with the new petrol E400 Cabriolet when we drove it previously, but in the UK the top seller of the facelifted Mercedes’ E-Class range will be the V6 diesel. It takes just a few miles to see why this engine is so popular.

It produces a thumping 620Nm of torque, and its power delivery through the seven-speed gearbox is silky smooth. Even a small flex of your right foot is enough to glide past slower-moving traffic, yet it still claims 47.9mpg, with 40mpg achievable in the real world.

Inside, the gearshifter has moved from the dashboard to the steering column, there’s fresh metal trim along the door panels and a mildly tweaked set of dials. Although the changes sound subtle, the exterior is anything but.

This engine is only available in racy AMG Sport trim, which has bigger front brakes, angular front and rear bumpers and sports suspension all standard. It looks great, but despite the upgrades, it fails to deliver on the promise of a really dynamic drive.

The ride over the uneven tarmac of our test route was mixed at best, with the occasional heavy thud sent juddering through the steering column, while the mighty in-gear thrust of the engine can’t disguise its hefty 1,935kg of bulk.

Slow down a little, though, and the E-Class makes more sense. The standard AirCap wind deflector is ugly, but does a fine job of keeping the cabin sheltered from the wind – and it now rises and lowers by itself above 25mph. The 300-litre boot is able to carry small bags and the cloth roof – like the rest of the cabin – feels beautifully made.

However, despite the smart styling and extra kit, the E350 looks pricey compared to its nearest rival, the 3.0 TDI Audi A5 Cabriolet.