New E-Class Estate is available to order now, with deliveries commencing in October 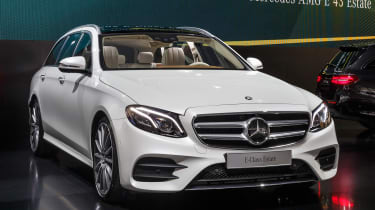 After it was revealed earlier this year, Mercedes has announced initial pricing of its new E-Class Estate. The German brand's wagon kicks off at £37,935, £2,000 more than the saloon.

That price gets you the E220d SE with its new 192bhp 2.0-litre turbodiesel with a nine-speed automatic gearbox. It manages 67.3mpg and emits 109g/km of CO2, which is 6mpg and 7g/km worse than the saloon.

At the front, the new car is nearly identical to the saloon on which it’s based, yet from the B-pillar, the roofline extends further back. The rear lights appear as if they’ve been lifted from the smaller C-Class Estate, wrapping around from the tailgate on to the wings. Long overhangs ensure the new E-Class is the most practical premium estate in its class.

It features a total load volume of 1,820 litres. That beats the Audi A6 Avant (1,680 litres), yet it falls short of the giant and significantly cheaper Skoda Superb (1,950 litres). The Mercedes has a trump card, though, as later this year it’ll be available with a third row of seats in the boot. 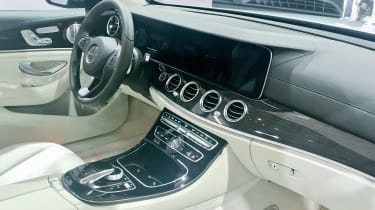 Practical touches such as keyless go and a hands-free tailgate are included, while a load-securing kit can divide the boot floor using fasteners, rods and luggage holders. Self-levelling air-suspension is standard, too.

The Estate features the same high-quality interior as the saloon. That means top-spec versions get the huge 12.3-inch screen and digital dials, while entry-level models make do with a conventional analogue set-up. 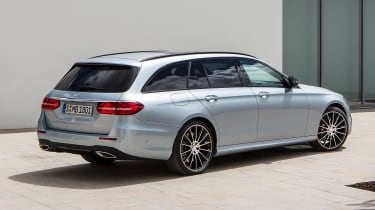 An Acoustic Comfort package will be available from the end of the year. This applies a special film to the windscreen and side windows – along with further insulation in the footwells – to provide lower levels of background noise.

The same classy materials feature, including open-pore woods, metals and leather. Like the saloon, the Estate comes with plenty of kit. Active Brake Assist is standard, while the semi-autonomous Drive Pilot system is also available, allowing drivers to safely follow the car in front at up to 130mph. Remote Parking Pilot is optional.

At launch, UK engine options will be the same as for the saloon, with the E 220d diesel launching first, and E 200d and six-cylinder E 350d models going on sale later in the year alongside a new AMG E 43 petrol. All cars use the familiar nine-speed 9G-TRONIC automatic gearbox. 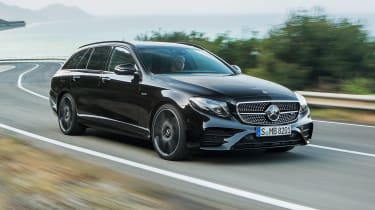 What do you think of the new Mercedes E-Class Estate? Let us know below...