The new all-electric Mercedes EQC SUV will go on sale in the UK this July, priced from £65,640 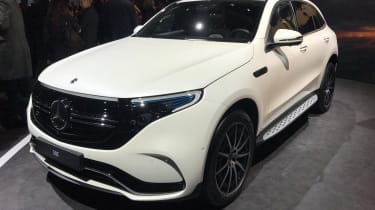 Mercedes has announced pricing and specifications for the all-electric EQC SUV. It will be the German firm’s first purely electric model, and will act as a rival for the Tesla Model X, Jaguar I-Pace and Audi e-tron. The first limited edition EQCs will reach UK dealerships in July, followed by the launch of the wider range in late 2019, with prices starting from £65,640. 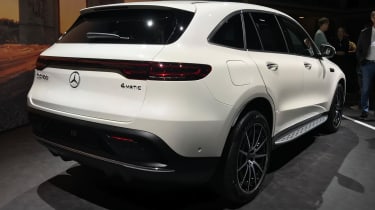 Range-topping AMG Line Premium Plus models get all the above equipment, as well as a head-up display, memory seats and a 360-degree camera. Mercedes’s MBUX interior assistant is also included, which adds voice and gesture control for both the driver and the front passenger. Prices start from £74,530.

Mercedes will also produce a launch edition model of the EQC during its first year of production, called the Edition 1. Priced at £74,440, it’s based on the Sport trim level, but adds an electric sliding roof, Burmester sound system, wireless smartphone charger and Mercedes’s augmented-reality navigation, which overlays images from the car’s camera with direction arrows, street names and house numbers. 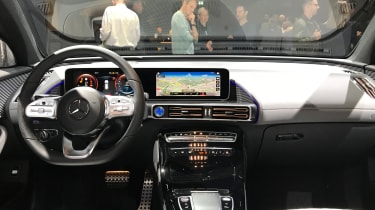 A limited-run variant called the Edition 1886 will be available from July, prior to the release of the EQC’s complete range. Limited to just 100 units, and priced at £79,260, it also adds a host of additional equipment to the base model EQC, with a 360-degree camera, memory seats, a head-up display and a set of 20-inch alloy wheels.

Revealed at this year's Paris Motor Show, the EQC is a 4.7-metre-long, five-seat SUV. It’s slightly lengthier than the I-Pace, but its wheelbase is around 11cm shorter than the Jag’s, at 2,873mm. The EQC does not get its own bespoke electric platform unlike many of its rivals. Instead, the EQC sits on a heavily modified version of the Mercedes GLC platform.

The design of the EQC is arguably more conventional than that of the Model X and the I-Pace, although there are still more than enough design touches to highlight its alternative powertrain.

A grille has been kept at the front end, but it has a solid black section that runs between the headlight units, along the lower edge of the bumper. This panel also has a line of optical fibre at the top, which is designed to emit light, that joins the daytime running lights.

The EQC’s side profile is similar to that of the firm’s current small family SUV, the GLC, especially around the C-pillar, and the slab-bladed alloy wheels are another hint at the car’s eco-focus. The rear end mixes some cues from recent conventional models, such as the A-Class, with a tail-light design that runs across the hatchback panel.

The boot capacity of the EQC will be around 500 litres, or about 70 litres less than the Jaguar I-Pace’s. Mercedes also says the car can tow up to 1,800kg, which is 700kg less than the similarly-sized GLC.

Mercedes claims the EQC’s front motor is focussed on efficiency in low to medium loads, while the rear motor is designed to boost performance. The 80kWh battery pack, which weighs 650kg alone, gives the newcomer a range of 259 miles on the tougher WLTP test cycle. 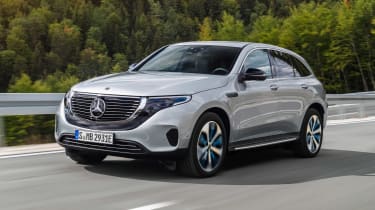 The EQC has an onboard 7.4kW charger for AC charging, while all EQCs will also get DC charging as standard. Mercedes claims this faster configuration will allow the car to be taken from 10 percent to 80 percent of charge in around 40 minutes.

There will be a choice of five driving modes: Comfort, Eco, Max Range, Sport and an ‘individual’ program that can be configured by the user. The car’s throttle pedal will give haptic feedback to the driver to encourage a more efficient driving style in the eco-focused modes, and the driver will also be able to adjust the level of brake energy recuperation via paddles behind the steering wheel.

Drivers will also be prompted to lift off the accelerator and use energy recuperation instead of brakes if the system expects an imminent reduction in speed, say for a speed limit change.

The EQC is the first of a new family of all-electric Mercedes. The firm has already previewed what’s likely to be the second model with a three-door hatch called Concept EQA. It’s expected to produce that vehicle at the same factory in France that builds electric Smart cars, while the EQC will be manufactured in Bremen and China.

These are the best electric cars on sale right now...