Merc's new luxury convertible G-Class, the G 650 Landaulet, is its most expensive and most ridiculous creation yet 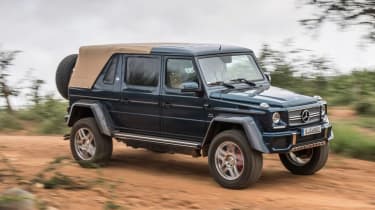 Giant size, ultimate comfort, massive power and an insane price tag – the Mercedes-Maybach G 650 Landaulet marks the top of the top in almost any car category and will become the absolute dream car for sheikhs and show-offs alike. But none of this can hide the fact that Merc’s most expensive model is also it’s most ridiculous. It’s not coming to the UK, and to be honest, that’s probably for the best.

While Mercedes is busy testing the first all new G-Class in almost four decades, the outgoing model is saying farewell with a very bold statement: A stretched Landaulet version sitting under the ultimately opulent Maybach badge.

At 5.35 metres long and 2.24 metres high, the mega G-Wagen rides on 22-inch wheels and boasts almost half a metre of ground clearance. With an impressive silhouette that makes the upcoming Rolls-Royce Cullinan look like a Smart Fortwo and a level of luxury that’s way beyond what we’ve seen in the Bentley Bentayga, Mercedes-Maybach claims this ‘new’ G-Wagen is the ultimate SUV.

We’ll come back to the way it drives though, because the new Landaulet is even more captivating from the back. In fact, there is simply no other SUV – and certainly no convertible – with as much back seat comfort as the Landaulet. 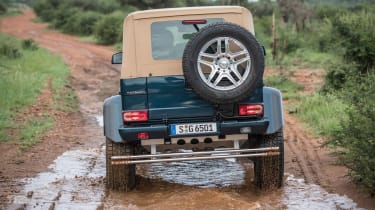 With the seats lifted from the flagship Maybach S-Class, the Landaulet could quite easily be considered the most luxurious sunbed in the world. Each individual seat is multi-adjustable and can be set into a fully-reclined position, while also boasting massage functions to soothe the worst aches and pains after a long day on the dunes of Dubai.

Wedged between the two rear seats is a large centre console featuring folding tables and thermal cup holders, which can cool or heat drinks as the passenger desires. Beneath the retractable glass partition is a cockpit in the style of the driver’s dashboard, where two 10-inch infotainment screens are found. The two-tone upholstery is available in four different colour schemes, while there are three hues for the folding fabric roof. 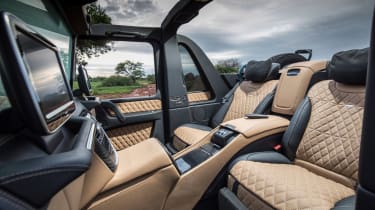 To avoid people peeking in, you can raise a roll-up partition between yourself and your driver at the push of a button. But privacy may not be what the typical Landaulet buyer is looking for, in which case this Maybach remains the perfect choice. Just fold back the roof, stick your head out of the giant opening, and wave to the crowd. To see and be seen has never been easier.

The Maybach Landaulet might be the most comfortable and ostentatiously designed G-Class ever, but those who want one will need to act quick. Just 99 left-hand-drive cars will be built, none of which are officially destined for the UK. But even if the undoubtedly sky-high price makes the Maybach G 650 Landaulet the most expensive Mercedes in the current line-up, we doubt dealers will have trouble selling every last one.

Thanks to its 3.3-tonne kerbweight, there’s no puny diesel motor under the bonnet. As the most pretentious Mercedes on the market, engineers have gone straight to the top shelf and fitted AMG’s storming bi-turbo V12. However, despite its shipping container-like aerodynamics, the 621bhp 12-cylinder engine never seems fazed, with 1000 Nm of torque serving up more than enough grunt for a smooth and effortless ride whatever the terrain. 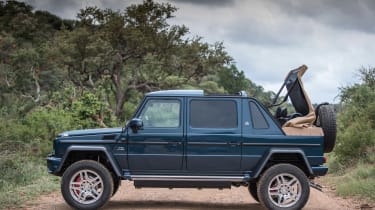 And even if there are cheaper SUVs with better acceleration and higher top speeds, it’s an impressive, heart-stirring experience to pilot this giant from 0-62mph in less than six seconds. And the faster you drive, the more grateful you are for the wider track and stretched wheelbase. It may have taken 40 years, but the G-Class no longer appears to drive like a frightened, wild animal on a game drive. Instead, it’s become as secure and dignified as a charging rhino.