Does a range of tweaks enhance the big-selling Mercedes GLA crossover? 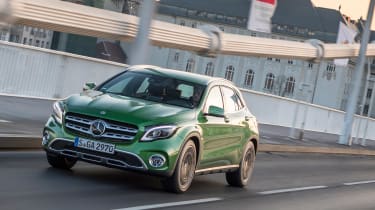 The GLA hasn’t shot to the top of the premium crossover class as a result of these minor mid-life updates – in fact, its position hasn’t really changed at all. It’s a good-looking, jacked-up hatch with an upmarket interior and tidy handling, but it lacks practicality, a raised view and (in this spec at least) the off-road ability to compete with its rivals. The ageing 2.1-litre diesel engine lacks refinement too, proving the all-new model due in 2019 can’t come soon enough.

The C-Class might be Mercedes’ biggest-selling model in the UK, but the brand’s smaller cars aren’t exactly floundering. Built on the same platform, the A-Class, B-Class, CLA and GLA have together accounted for more than two million units in the past five years. There isn’t a big need to renew the recipe, then, but the GLA is now the last of these cars in line for a series of small mid-life updates.

Like its relations, the GLA’s tweaks will require a keen eye – even for the most avid fan. From the outside, the BMW X1-rival receives chunkier bumpers, new LED lights, a plethora of wheel choices and a fresh colour palette. UK models also receive ‘off-road comfort suspension’ as standard, raising the ride height by 30mm. Confusingly, however, the Euro-spec car we’re driving here has the comfort suspension without the increased ride height (an option in the UK alongside lowered sports suspension) – meaning it sits awkwardly between more conspicuous SUVs such as the X1 or Audi Q3, and the cheaper A-Class hatchback.

Inside, Mercedes has added a bit of glitz, with new upholstery choices, higher-quality trim and chrome-edged control panels. There are redesigned instruments, too. The overall effect is subtle, adding little to what was already a pleasant, but not class-leading, cabin. The materials are reasonably solid and upmarket (if not fully up to Audi's standards), but the button-heavy console and tablet-style screen aren’t as well resolved as those in newer models. 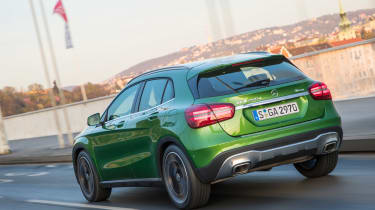 There’s not a huge amount of space; the front has plenty of storage but the driver’s footwell is a bit tight for those with longer legs. The rear lacks headroom and feels claustrophobic, particularly with the dark headlining of our test car, and the 481-litre boot - despite being a decent size in isolation - is smaller than the X1’s.

New optional equipment at least brings some of the features from larger models, with the split-screen 360-degree-view camera system and a hands-free tailgate, while new option packs up the luxury. Our test GLA was in well-equipped AMG Line spec, although at £33,000 it’s pricey.

It also had adaptive dampers, improving the ride quality in Comfort while keeping the Merc’s handling in check when you dial it to Sport. However, even in the softest settling the GLA's ride is no better than adequate, thumping and crashing over large potholes that are kept isolated from the cabin in a BMW X1.

Nevertheless, the GLA remains tidy in bends with little body roll, changing direction with a fair amount of agility. There’s plenty of grip from the optional 4MATIC all-wheel drive system, too. The steering is accurate but not brimming with feel or natural weighting, though. 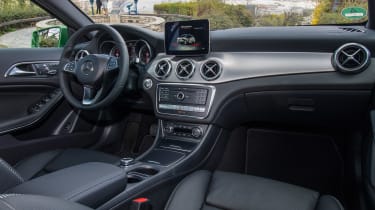 The engine in our best-selling GLA 200d is unchanged. With 134bhp and 300Nm of torque, the ageing 2.1-litre unit is as gutsy and flexible as the equivalents in newer rivals. However, it lacks refinement compared with the best in this segment, with vibrations through the pedals and an ever-present drone around town. A GLA 220 petrol variant is on the way, but it wasn’t available to try at launch.