Mercedes updates its hot GLA 45 crossover with styling tweaks, and new tech, but is it any good? 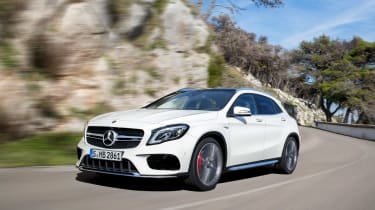 Though little changes for 2017, the Mercedes-AMG GLA 45 is still a mightily fast and genuinely entertaining car to drive. It’s suitably racy to look at, although those who want to use it on the school run will find Audi's, now discontinued, RS Q3 more useable day-to-day. It’s not exactly cheap, either, and doesn’t offer much over the similarly-sized, more agile and just as rapid AMG A 45.

Like the diesel GLA we've also driven, the engineers at Mercedes – or more specifically Mercedes-AMG – have endowed the brand’s second smallest model with a series of mid-life revisions for 2017. We’re driving the updated hot crossover for the first time to see it’s raised its game.

The exterior tweaks for the revised GLA 45 focus around the front end, with a new front apron adding vertical louvres to the air intakes and a silver chrome splitter. These features aren’t just glitzy add-ons, they’re designed to more effectively direct cool air to the radiators. At the rear there’s a new diffuser insert and a revised spoiler, too. All of these changes give the GLA 45 a lower drag coefficient than before, at 0.33Cd. 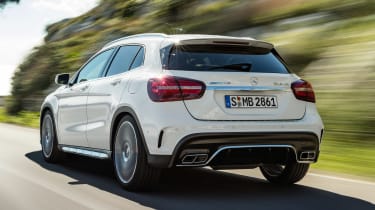 Further upgrades include standard-fit LED headlamps, a fresh grille and optional 20-inch multi-spoke alloys. Inside, though you’ll quite easily miss the changes – with the tweaks limited to new man-made leather trim on the dash and a redesigned instrument cluster, while additional optional extras include a hands-free electric tailgate and 360-degree camera.

All fairly minor changes, then. But few people would see any need to upgrade what sits under the bonnet. Boosted from 355bhp to 376bhp in 2015, the 2.0-litre turbo petrol engine is still startlingly rapid, firing the crossover from 0-62mph in 4.4 seconds. For reference, that’s an astounding four tenths of a second faster than a Porsche Macan Turbo.

As a result it rips through the rev range with real ferocity, only pausing as the seven-speed dual clutch box quickly but jerkily goes for another gear. The sound it makes is more industrial than tuneful, though there’s no arguing with the volume – especially with our car’s optional (and even more intense than before) AMG Performance exhaust popping and crackling on the overrun. The lighter, mechanically identical AMG A 45 is faster still, however. 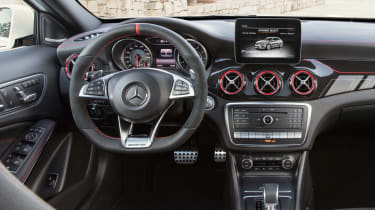 But it’s not an engine that ever really settles down to a refined cruise; exhaust noise is always present in the cabin, while the eager throttle and highly-strung gearbox means it lacks finesse in town. There are no changes to the suspension or the 4MATIC four-wheel drive system, either. The damping is surprisingly supple, however, meaning the ride is only jarring over the very worst surfaces (and actually not that much worse than the standard GLA), while the steering is nicely weighted but not bristling with interaction.

It resists understeer well as torque is shuffled between the front and rear axle, but playfully moves about if you lift off the power - a trait which gives the GLA 45 a bit of extra personality. It’s fun, sure, but the A 45 responds slightly more sweetly and sharply to inputs, while there are considerably cheaper (and no less practical) hatchbacks like the Volkswagen Golf R that can put as big a smile on your face for substantially less cash.