Hydrogen-fuelled Mercedes GLC F-CELL is set to reach dealerships in 2018, although it won't be coming to the UK 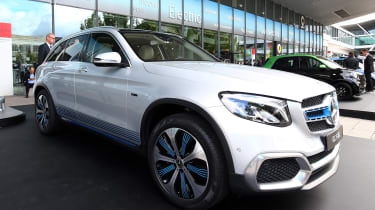 Mercedes has revealed the GLC F-CELL, a hydrogen fuel-cell version of its BMW X3 and Audi Q5 rival that’s already confirmed for production, at the 2017 Frankfurt Motor Show.

The new electric SUV has a pair of 4.4kg hydrogen tanks below the floor, each encased in carbon fibre and running at a pressure of 700 bar. Refuelling takes roughly the same as a conventionally fuelled vehicle - about three minutes - and when full, the GLC F-CELL has range of up to 437km, depending on which mode the vehicle is using.

The rated output of the car’s fuel cell is 147kW, with 350Nm of torque available. That’s enough to take the GLC to an electronically limited top speed of 160km/h. 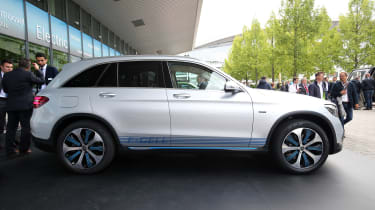 As well as using hydrogen fuel, the GLC F-CELL can be charged from a wall socket. This replenishes lithium-ion batteries which can then assist the overall system or run the car in pure-electric mode for short distances (around 49km).

The latest F-CELL can run in four modes. Hybrid allows the car to draw energy from both the fuel cell and the lithium-ion battery, while F-CELL maintains the battery charge by using only the fuel cell. BATTERY forces the GLC to run using power from just the lithium-ion cells, while CHARGE goes further than F-CELL by actively charging the battery as the car is driving along.

The GLC F-CELL gets a few subtle styling modifications to separate it from regular GLCs, with different alloy wheels and blue detailing along the sills and the rear bumper. There are a few compromises on space because of the size of the fuel tanks; the boot is smaller than usual and the rear seat sits slightly higher than normal, reducing the amount of headroom. 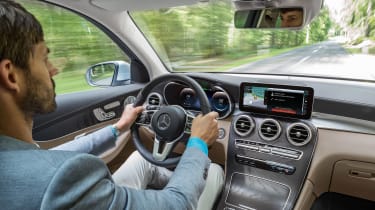 Mercedes says that the production version of the car will get rear air suspension as standard. The concept’s fully digital instrument panel and widescreen COMAND infotainment system are also likely to be carried over.

The new car isn’t the first fuel-cell Mercedes, but it demonstrates how the German manufacturer is making gains in the technology. The overall powertrain has around 40 per cent more output than the previous offering, the B-Class F-CELL - but there’s around 90 per cent less platinum involved in the system’s construction, helping to drive down its cost.

Mercedes hasn’t issued even a rough on-sale date yet for the GLC F-CELL, although it’s likely to reach dealerships some time in 2018. They won’t be in the UK, though; Merc’s British arm has no plans to sell the car here.

What do you think of the Mercedes GLC F-CELL? Would you consider a hydrogen-fuelled car? Let us know below... 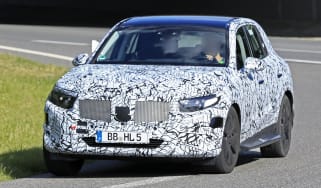