Excellent body control and a refined motorway cruiser, but ride can be fidgety on big wheels 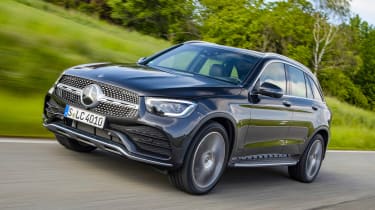 The GLC was one of the first cars to be launched under Mercedes’ new naming structure for its range. GL means this car is an SUV, while the C refers to its size, because this model is based on the same MRA platform as the C-Class saloon. This platform was designed with four-wheel drive in mind from the outset, so all models in the GLC range boast all-wheel traction that helps out in slippery conditions.

If you want a sporty SUV, take a look at the Jaguar F-Pace or Porsche Macan. The Mercedes GLC majors on comfort and refinement, and as a result, isn’t particularly dynamic. That’s despite having a rear-biased torque split; in other words, while it’s four-wheel drive, more than half of the power is handled by the rear wheels in normal driving.

That’s not to say it’s bad to drive. While the GLC isn't particularly playful and feels quite heavy through the turns, it is calm and composed on all but the very worst roads – and thanks to the standard 4MATIC four-wheel drive and raised ride height, can hack it in the rough stuff if you give it opportunity.

With air suspension, the GLC is more comfortable than rivals such as the Volvo XC60 and Audi Q5: It reacts to bumps in the road with more fluidity. This flowing ride quality is the GLC’s calling card and makes it the nicest, most comfortable car over rough surfaces. 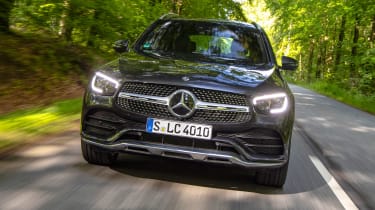 Body control is on the looser side, however, but this means where the Volvo and Audi transmit some harshness through to the passenger compartment over the worst surfaces, the Mercedes filters out more nasty wheel movement. However, even in Sport+ mode, which stiffens up the chassis settings, the GLC’s set-up is still the softest, which allows more roll through corners.

It means the Mercedes is the least agile choice, while the steering is also the heaviest, and in this setting you lose the languid ride but don’t gain much else. This trait at least makes it extremely comfortable on the motorway, but turn onto a country road and you won’t be able to keep pace with the Volvo or Audi, which feel sportier.

Regardless of the model and you’ll find that it’s not as sharp to drive as a Jaguar F-Pace S, because the steering is a bit numb and is on the light side. You can add weight using the optional driving modes, but it’s somewhat artificial and doesn’t give the feeling of agility you get in the Jaguar. The Merc rolls through corners to the degree we’d expect of a big SUV, but that’s because the car is set up more for comfort.

Whether it’s big potholes or speed bumps, the GLC feels smooth and rides well. Bigger bumps are softened off, and at speed the road surface is smoothed out. It goes well with the big engine, and the GLC will suit those who prefer a softer set-up.

The AMG mode is also too firm for the road, but it’s easy to rectify both flaws by switching back to the Comfort setting. The ride is softer (although more severe bumps do still send a thumping shockwave through the chassis, despite the tall tyres) and the transmission is smoother. It changes up quickly to maximise efficiency, but because of the GLC’s portly 1,845kg kerb weight, even if you ask for a gentle burst of acceleration, it will kick down two or three gears. It makes for slightly disjointed progress where the Porsche Macan is keener to hold a gear.

From 2019, both use Mercedes' 2.0-litre unit first fitted to the C-Class. It’s a step up over the old 2.1, being smoother, quieter and a little bit faster, too. They offer 191bhp and 242bhp respectively, while the more powerful model also packs an extra 100Nm of torque for a significant 500Nm. It is livelier when you floor the throttle, but the standard car should be enough for most people.

The nine-speed auto features short, closely-stacked lower ratios. The box is a little sluggish to change, but it’s smooth, so when you’re driving around normally the Mercedes feels silky, while the engine is hushed at normal pace. 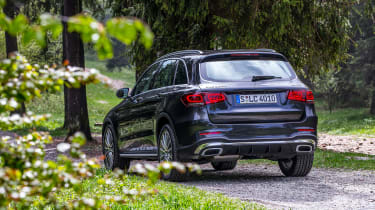 As with the Audi Q5’s twin-clutch S tronic ‘box, the Mercedes often changes down from top on the motorway, but it doesn’t suffer from the same big gaps in ratios, which makes for more relaxing progress. And while the 2.0-litre engine might not quite be on a par for the smoothness of the BMW X3’s 2.0-litre diesel, it’s more refined than the Jag's Ingenium diesel.

For customers looking for improved economy and lower emissions, Mercedes has also introduced the GLC 300 e plug-in hybrid. With a 2.0 litre petrol engine and 13.5kWh battery it's still capable of 0-62mph in 5.8 seconds and a top speed of 143mph.

The GLC 43 uses an AMG-designed twin-turbo V6 petrol with 385bhp and 520Nm of torque. It’s eye-wideningly fast for a 4x4, and will crack a 0-62mph time of 4.9 seconds, where conditions allow. Sport+ mode gives a lovely crackle from the exhaust on gear changes, punctuating the engine’s musical wail. But, in this most aggressive setting, the gearbox’s upshifts feel a little jerky.

The Mercedes-AMG GLC 63 uses a thumping 4.0-litre twin turbocharged V8 that features in a wide range of 63-badged Mercs. It delivers sensational performance - a 0-62mph time of just 3.8 seconds for the S version, makes it a tie for the Alfa Romeo Stelvio Quadrifoglio in a straight sprint, and quicker than a BMW X3 M. It delivers a thunderous soundtrack too, if not quite as full-bodied as it sounded before the WLTP-enforced emissions tweaks.