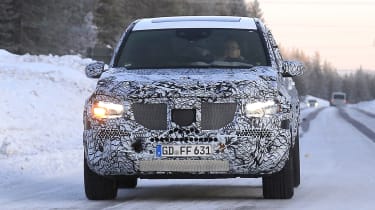 Mercedes' seven-seat GLS has been spotted by our photographers who have snapped prototypes of the upcoming luxury SUV conducting winter development testing ahead of an anticipated launch in 2019.

The new seven-seater is set to compete against the forthcoming BMW X7 and Audi Q8 as well as the established Range Rover. The GLS is one of many new SUVs Mercedes is currently working on; a new generation of GLA, GLE and G-Class, along with an all-new Maybach SUV are currently in the pipeline.

These spy photographs show that we’re still a long way from seeing the design Mercedes has in mind for the next-generation GLS, and given that the firm has yet to begin its fresh SUV rollout, it’s possible that a new-generation design language will be rolled out across the board. 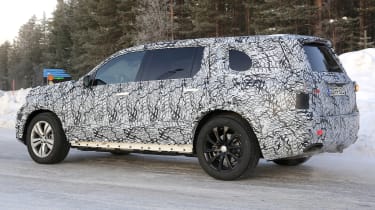 From the overall shape of the mule though, we can see that the boxy profile of the current generation car – introduced in 2012, and since facelifted and given the GLS name in late 2015 – will be ditched in favour of a smoother look with a slightly more rakish profile towards the rear.

The car’s positioning as the flagship within Mercedes’ SUV range means S-Class comparisons are possible though, and we expect this new car to take on most of the cabin tech featured on the recently facelifted version of Mercedes’ luxury limousine.

New engines could be shared with the S-Class too, as the GLS seems a likely candidate to benefit from the firm’s upcoming fresh inline six-cylinder petrol and diesel units. The former supports 48v electrification with an electric turbocharger and an ‘Integrated Started Alternator’ system, which is used for energy recovery and can furnish the combustion engine with additional electric boost. A V8 biturbo powered AMG option will appear later in the next GLS’ lifespan.

Under the skin however, it could share more in common with the next-generation GLE, due in 2018, by making use of Mercedes’ MHA platform – a new modular architecture dedicated for SUVs.

What do you make of the next-generation Mercedes GLS? Tell us your thoughts in the comments. 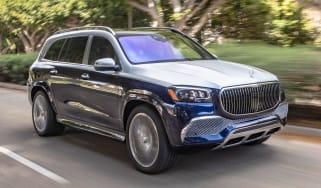 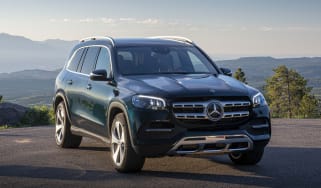