Can a new name and look turn the old GL into the S-Class of SUVs? We drive the new Mercedes GLS SUV in the UK 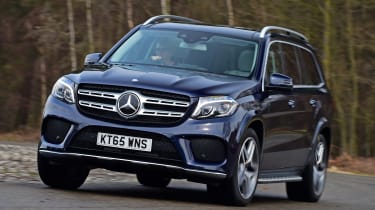 SUVs don’t come much bigger than the GLS, and for some its huge size and ability to seat seven adults will appeal. However, its bulk doesn’t make up for the fact that it’s more expensive, less pleasant to drive and beginning to look a bit dated alongside all of its main rivals. The Audi Q7 and Volvo XC90 won’t carry as much, but that’s likely to fade into insignificance when you consider the £20,000 saving you’ll make if you buy the latter.

No manufacturer has as many SUVs in its range as Mercedes. There are seven in total, and the new GLS is by far the largest and most expensive. Now, this seven-seat monster has finally arrived in the UK.

Mercedes may call the GLS ‘new’, but that’s only partly true. It’s correct in the sense that the model has a new name, a slightly modified exterior design and updated cabin, but ultimately the Range Rover rival is a mildly tweaked version of the old GL. 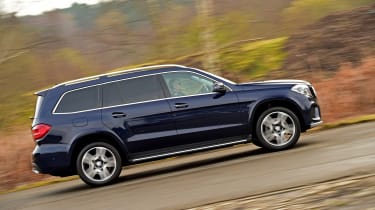 The ‘S’ has been glued on to denote it as the range-topping SUV – the S-Class of SUVs, if you like. Indeed, that’s exactly what Mercedes is marketing the GLS as. This is a bold claim – so has the brand succeeded?

In a word, no. The S-Class is one of the most luxurious, advanced and accomplished cars on sale – but trying to replicate this in an SUV package that’s been around for 10 years was always going to be a challenge.

Inside, the GLS is by no means unpleasant. The dash has lashings of leather, as well as gloss-black plastics and brushed aluminium on the centre console. You’ll need to look hard to find anywhere Mercedes has cut corners, but against the S-Class the overall cabin architecture is beginning to look a bit dated. Even alongside rivals such as the Audi Q7 and Volvo XC90, the GLS lacks that sense of occasion and doesn’t feel worthy of its near-£70,000 price tag. 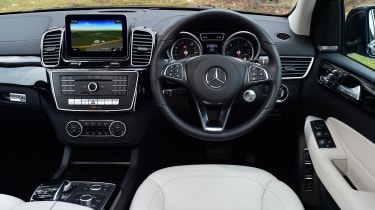 Having said that, one thing the GLS isn’t short of is space. It’s a car primarily built with America in mind, which means there’s more room inside than in most one-bedroom flats. Seven seats come as standard across the range, and all of them can accommodate adults. In the cabin’s smallest configuration the boot is five litres bigger than a Ford Fiesta’s, at 295 litres, but this can increase to a huge 2,300 litres with both the third and second rows of seats folded. That’s bigger than every one of the GLS’s rivals.

However, if you’re spending £70k on an SUV, you’ll want more than simply sheer square footage for your money; how the car drives will also be important. And this is another area where the GLS falls short. Most models sold in the UK will be the car we have here: the 350d 4MATIC powered by a 256bhp 3.0-litre V6 diesel. All GLS models feature air-suspension as standard, but trying to contain nearly 2.5 tonnes of SUV on 21-inch alloys brings some snags along the way. 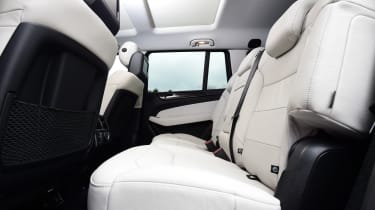 While the ride is largely smooth and compliant, at low speeds the huge wheels thud into potholes and writhe over rutted surfaces. The Mercedes certainly lacks the grace of a Q7 on the move. It’s surprisingly brisk, though, covering 0-62mph in just 7.8 seconds. The steering is light, which makes the car feel more nimble than its proportions would suggest, but the feedback is vague. Combined with the noticeable body roll, it can feel a bit wobbly when pressing on.

The GLS works best when you ease off, leave the Dynamic Select in Comfort and waft along without asking too much of it. High-speed refinement is very good, as the engine remains hushed, while the air-suspension cushions you on the move.