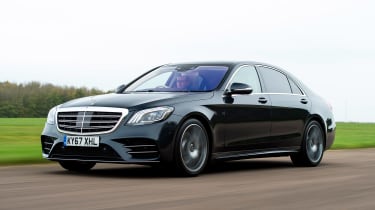 The Mercedes S-Class is easily the best car in its class, but it also shows up much more expensive models with its sublime ride, expansive tech package and luxurious interior. It’s supremely comfortable while still being good to drive, and the new straight-six diesel engine is more powerful, smoother and quieter than the previous V6. Even as the cheapest long-wheelbase model in the range, this new S 350 d retains its place at the top of the pile, and is a worthy flagship model for Mercedes.

The S-Class is famous for being a tech leader in the car industry, as well as a core model for Mercedes. It’s used as a test bed for the brand, as features filter down into lesser models over the years.

To stop the S-Class from falling behind, Mercedes has updated it with new equipment and an updated look. We first drove the more powerful S 400 d in Europe back in July, but now we’ve got the entry-level diesel in the UK.

A new set of bumpers, lights and a fresh grille are the main exterior changes that help the car to look a little newer, but there’s nothing revolutionary about those differences. The main difference with this new S-Class in terms of engineering is its straight-six diesel engine, which replaces the V6 in the previous 350 d model. 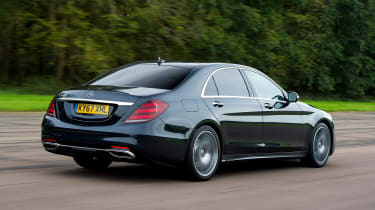 While the old engine was smooth and powerful, this new unit is an even better fit. It’s extremely quiet and there’s only a faint rattle at idle. In fact, you’ll sometimes think the stop-start system has kicked in, even when the engine is still running. It’s not totally silent as the revs rise, but it’s still a great fit and feels suitably luxurious.

There’s plenty of power too; with 282bhp and 600Nm of torque (the latter available from just 1,200rpm), the S 350d is a genuinely fast car. It was built for motorway cruising, and the torquey engine means overtakes are never stressful or drawn-out. The nine-speed automatic gearbox shifts smoothly, so even when it does need to kick down, there’s little hesitation.

It’s a fantastic powertrain, even as the entry-level model in the range - it’s hard to see why you’d want to shell out the extra for the S 400 d (due in 2018), or an additional £10,000 for the S 500 petrol – especially with the diesel’s claimed 52.3mpg fuel economy. Still, as a flagship model, saving money won’t be the main reason to buy this car. 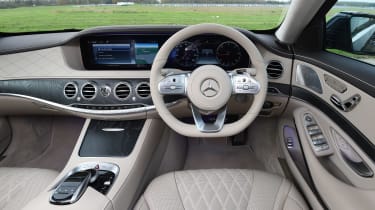 The two biggest reasons to love the S-Class, however, are its ride and its technology. Even on bumpy British roads, the big Mercedes is one of the most comfortable ways to travel from A to B. It’s not floaty or bouncy, and instead, the suspension soaks up dips and bumps as if they simply weren’t there.

The sublime ride doesn’t take a huge toll on the driving experience, either. A fast, flowing road is good fun in the S 350 d, thanks to the accurate steering and a body that’s surprisingly resistant to roll. It’s no sports car, but there is still some driver appeal.

Our long-wheelbase test car is all about the back seat, though - and unsurprisingly there’s more legroom than you’d know what to do with, along with some very comfortable seats. The build quality inside is superb, and the materials are excellent as well.

A range of updated tech adds to the car’s appeal, too. The Active Distance Assist Distronic (£1,695) automatic cruise control system can use sat-nav data to look far ahead and prepare for obstacles such as toll booths. It’s also able to use ‘car-to-x’ functionality to avoid traffic jams reported by other cars. It’s clever, but something already done by the likes of Google Maps, which are also now available on the car via Android Auto and Apple CarPlay functionality.