Big on luxury and performance but with more than a touch of class, the new Mercedes S-Class Coupe is a formidable machine... 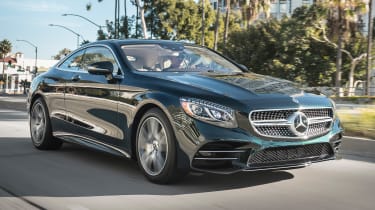 It may seem strange to call a car as expensive as this good value. But, in the rarefied world of super-coupes, the Mercedes S 560 looks a relative bargain. Our test car had four-wheel drive, compared with the rear-drive layout that will feature in the UK, but even so, the S-Class coupe feels more capable, comfortable and special than ever. It might not have quite the brand cachet to match Bentley’s latest Continental GT, but the refreshed model has a high-quality finish and enough refinement and composure to warrant a place on the shortlist of any luxury coupe buyer.

These are exciting times if you’re in the market for a luxury grand tourer. The Aston Martin DB11 is selling well, while Bentley’s new Continental GT is about to land on well-manicured driveways. Now, though, Mercedes is introducing the updated versions of its S-Class Coupe and Cabriolet.

The two-door versions of Merc’s flagship get some of the details introduced on the limousine’s recent revision. But they also get a few tweaks of their own, including a new engine. The motor in question is a 4.0-litre twin-turbocharged V8 petrol, producing 463bhp and 700Nm of torque and it powers the car we’re testing here: the S 560 Coupe. 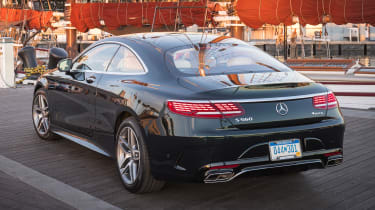 The other models in the S coupe line-up are the S 63 AMG, which switches from its old 4.7-litre V8 to the same 4.0-litre twin-turbo unit that’s already starred in the E 63, and the gloriously insane S 65 AMG. The latter retains it’s colossal V12, with its transmission limited 1,000Nm of torque.

On the road, the S 560 is convincing enough to make you wonder whether it’s worth paying the extra £25k that Merc is charging for the S63 – not to mention the near-£90,000 premium of the S 65. The new 560 V8 is a fabulous motor, in fact, with plentiful reserves of torque low down - enough to make the coupe feel rapid, in a sophisticated kind of way. Its nine-speed transmission is snappy too, offering intelligent, smooth shifts when required.

It’s actually a surprisingly easy car to drive. It ought to be a bit daunting, given the five-metre length, but the S-Class Coupe does a good job of shrinking around you. It’s no sports car, but it is quite happy to be threaded along twisty roads at a fair lick, helped by nicely weighted, accurate steering and impressive body control.

Cruise along at 65mph and the engine will be pulling no more than 1,400rpm, puffing the jumbo two-door along quietly and (relatively) efficiently. But if you do want to hear what’s going on under the bonnet, revving the V8 reveals an exhaust note with thudding bass – a bit like listening to a NASCAR through double glazing.

The ride isn’t flawless; there’s that teeny bit of brittleness at lower speeds that you often find with air suspension. But make no mistake: this is a car that does an excellent job of isolating you from the vast majority of what’s going on around you, and that includes the surface you’re driving over.

Inside, the cabin will feel familiar to those who’ve experienced the updated S-Class, with the latest version of Merc’s COMAND system and a spectacular dashboard arrangement that includes two 12.3-inch screens. One acts as an instrument panel, and the other shows navigation and further vehicle and media-related information. It’s not the cleanest dashboard design but there’s no denying its grandstand appeal, with a sumptuous mix of high-quality fabrics and materials. 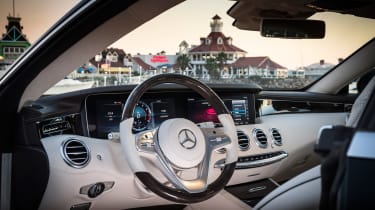 The basic dimensions of the car haven’t changed, so while it’s extremely spacious up front, you shouldn’t expect the same rear-seat accommodation as in the S-Class limousine. That said, it’s still extremely roomy by four-seat coupe standards. The boot is a decent size too, with around 400 litres of space - enough for a couple of sets of golf clubs or a set of weekend luggage.