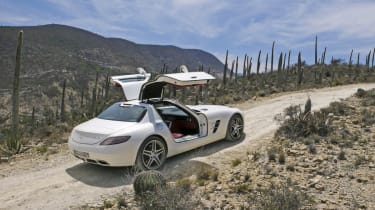 The gullwing door of the SLS AMG opens up – and so does the road ahead of us. Stretching 30,000 miles from Alaska to Argentina, the Panamerican Highway is the world’s longest piece of asphalt, but it’s a specific section that interests us today.

Auto Express is in Mexico, where we’re tackling part of the 2,500-mile route once described as the most dangerous road race in the world: the Carrera Panamericana. Back in 1952, Mercedes sent along a factory team with the aim of winning the event. Driver Karl Kling and navigator Hans Klenk did so spectacularly, despite having a frightening brush with death when their 300SL racing car hit a vulture.

We’re hoping for an incident-free drive in that car’s spiritual successor. The SLS has been developed by Mercedes’ official tuning arm, AMG, and the first examples will be delivered in a few weeks. But it’s unlikely many owners will get to experience their car on the Carrera Panamericana.

Firing up the SLS’s rumbling 6.2-litre V8 turns plenty of heads as we cruise through the bustling city of Oaxaca – our starting point for the journey. While the engine is big, it revs quickly; thanks to lightweight pistons and race car-style dry-sump lubrication, it weighs only 206kg. Delivering 563bhp, it’s the most powerful normally aspirated V8 in the world – and it’s a real peach to drive.

The scenery is just as stunning, with the surrounding mountain summits of the Sierra Nevada wrapped in cloud. We soon find ourselves on the 261-mile stage – a section of the original race which gave Kling and Klenk their place in history. Back then, the Merc drivers encountered a long right-hand bend which Kling took at 120mph. However, he failed to spot vultures sitting by the side of the road. When these scattered into the 300SL’s path, one hit the passenger-side windscreen, knocking co-driver Klenk temporarily unconscious.

Incredibly, despite bleeding badly from facial injuries, he told Kling to keep his foot down. The pair travelled 40 miles further, to a point where Klenk was able to attend to himself and the car. Both were covered in blood, glass and feathers. It was decided extra protection might be needed for the rest of the race, so eight vertical steel bars were bolted over the new windscreen.

Our drive south is much more sedate and drama-free. Where once the route was lined with spectators, now there are none – just lots of cacti. But that leaves us more space to enjoy the SLS to the full. You sit very low, over the rear axle, so it’s possible to sense even the smallest changes in the surface.

Super-wide tyres give the Mercedes enormous lateral grip in corners, while the double-clutch seven-ratio Speedshift gearbox responds immediately via the steering wheel paddles.

The SLS offers a fascinating soundtrack, too – reverberating around these Mexican roads just as the 300SL did all those years ago. Popping and cracking on the over-run, with a hard-edged rumble under full-throttle acceleration, the V8 is just superb.

Every twitch of the right foot has the car charging forward immediately. The steering is sharper than any Mercedes before it, too, while the brakes are extremely strong.

The SLS is also a great grand tourer, and after many hours over winding roads, our stage of the historic Carrera Panamericana lies behind us. As we peel ourselves from the superb seats and duck out under the gullwing doors, we’re much more relaxed than those before us 58 years ago.