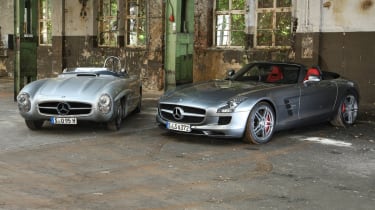 The SLS AMG Roadster might not be as rare or instantly iconic as the 300 prototype, but it packs a similar emotional punch. Both these stunning models confirm Mercedes’ credentials as a manufacturer of true greats, whether for the road or track. Performance has increased over the years, but the spirit of the silver arrow’s most specialised products remains the same. We can’t wait to drive the SLS later in the year – and enjoy the epic sound of the V8 engine without a roof to get in the way.

One of the brightest stars of the Frankfurt Motor Show next month will be the stunning SLS AMG Roadster. And in an Auto Express exclusive, we’ve brought the new Mercedes soft-top face-to-face with its forerunner: the 300 SLS from 1957.
Even though the two models are separated by more than half a century, when lined up alongside one another, the similarities are striking. Both feature classic sports car proportions, with long, stretched bonnets, stubby tails and big wheels pushed deep into each corner.
The matching sets of vents in the front wings make the link even more obvious, but the SLS is definitely the more aggressive of the two. Losing the roof and dramatic set of gullwing doors has done nothing to blunt its brutish, square-jawed styling. It’s significantly longer and lower than the 300, too, giving an imposing presence that will pull the crowds to the Mercedes show stand.

Once inside, the differences between the two cars become much more obvious. The SLS AMG Roadster is as luxurious as any other big Mercedes, with lashings of leather and carbon fibre trim across the dashboard and along the transmission tunnel. The electronic gadgetry includes a big, illuminated starter button, dynamic chassis set-up and traction control programs on the centre console.
By contrast, the 300 SLS was designed from the start as a competition racer for the road. It was originally built as prototype vehicle, and only two factory versions were ever produced – one of which was contested briefly in the US by Paul O’Shea, who went on to take several victories in a racing SL. The replica in our pictures was one of only 29 examples built by Mercedes itself to the original specification, using plans dug out of the archives by former engineer Hans Scherenberg.
There’s only a tiny sliver of glass to shield you from the elements, no windows and just a single roll-hoop to protect the driver in a crash. The enormous wood-rimmed steering wheel dominates the cramped cabin, while the four-speed bakelite gearknob could be no further removed from the lightning-fast seven-speed dual-clutch unit in the SLS Roadster. Start both engines, and a deafening sound fills the air. The 300 SLS’s racing pedigree becomes clear from the instant the 232bhp 3.0-litre straight-six roars into life. The twin exhausts in the side sills blare out an unfiltered race car soundtrack that’s utterly unique.
But the 6.2-litre V8 in the SLS responds with a threatening, bassy rumble that hints at its huge reserves of power. With 563bhp and 630Nm, the new drop-top has more than twice the firepower of the old car – even if the 300 is 620kg lighter due to its featherweight aluminium body and total lack of safety kit or roof.
The performance stats reflect this. Brave racers could push the 300 SLS to a face-shredding 164mph in its heyday, but the new Roadster will sail well past this to a top speed that’s just below the 200mph barrier.
The SLS also sprints from 0-62mph in only 3.8 seconds – so with a price tag of around £170,000 when it hits the UK, it will be the perfect rival for the Ferrari 458 Italia Spider.
Share this on TwitterShare this on FacebookEmail