New Clubman is big on space and style, but is it good value? We find out 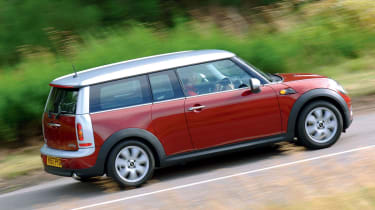 The Clubman is going to be a big hit – it’s a stylish machine that looks completely different to anything else on the road. It’s also full of neat detailing, and offers plenty of extra flexibility over the MINI hatchback. Factor in the Cooper D’s 1.6-litre diesel unit, and you’ve got a fast, yet frugal, small estate. It is pricey, but with residuals predicted to be even higher than the hatch’s, the Clubman should have no problems holding its value.

Mini buyers are growing up – and their favourite car is going with them. The exciting new Clubman has arrived in the UK, and we’ve driven it first.

Reviving a name first used on the Sixties’ original, the Clubman is a styl­ish load-lugger that sets out to cater for existing MINI fans, but also appeal to new ones when it goes on sale in November. We were very impressed with the flagship Cooper S version in Issue 978. The trouble is, at £17,210, it’s expensive. So, does the cheaper Cooper D make more sense?

Any fan of the shooting brake shape – made famous by cars such as the Reliant Scimitar – will love the Clubman. It looks sporty and classy, and with clever visual tricks such as contrasting C-pillars available in black or silver, it retains the compact appearance of the MINI hatch.

At the back are twin van-style doors, which open out to 90 degrees with the aid of gas struts. And inside is a twin-height boot floor, a sliding luggage cover and rear seats which split and fold flat. Thanks to a wheelbase that’s now 24cm longer, there’s more space in the back as well.

Of course, it’s not a proper estate car, but it is much bigger inside than the five-door – and this is the whole point. There’s 260 litres of boot space with the seats up and 930 litres with them down, so the Clubman will eas­ily swallow two people’s luggage.

One aspect that doesn’t quite work is the driver’s side ‘suicide’-style Clubdoor. While improving access, it forces passengers to exit on to the road. This is not acceptable for anyone in particular, and is especially danger­ous for families with small children.

Out on the road, the Cooper D scores top marks. Only at high revs does the 110bhp 1.6-litre unit sound remotely like a diesel – at all other times it’s super-smooth. And with 240Nm of torque, it provides plenty of punchy acceleration.

Take a glance at the figures and there’s even better news. Thanks to BMW’s stop-start system, which cuts the engine in traffic, the diesel power­plant returns nearly 70mpg and emits an impressively low 109g/km of CO2 – meaning road tax will cost only £35.

Handling is outstanding. The extra length brings a sense of increased stability, but the MINI’s trademark agility is still present. The steering is full of feel, and the compliant suspension keeps the car flat through corners, yet still soaks up bumps.

The big drawback is the price. Even at £15,400, you don’t get air-con as standard – this costs an extra £650 to install. And if you want to add a Pepper pack (a massive 90 per cent of MINI buyers specify options packages), you’ll have to fork out another £1,100. Nevertheless, the Cooper D is by far the pick of the range.

Rival: Volvo C30 The Clubman doesn’t really have any direct rivals, but in terms of image, the C30 gets close. It’s not the most spacious or versatile hatch. Yet it looks cool and drives well, if not as sharply as the MINI.