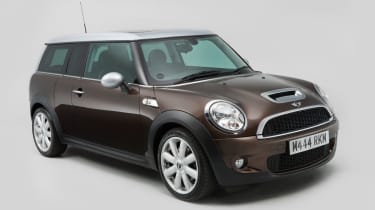 We’re big fans of the regular Mini, so anything that boosts its practicality while retaining the cheeky looks and fun drive can only be even more desirable. With its excellent build and reliability, plus comfortable and well designed interior, the Clubman is a great car. Senior road tester Owen Mildenhall ran a Cooper D Clubman for 15,000 miles on our fleet, and he summed it up when he waved goodbye to it. “No other small car I’ve driven feels as grown up, well built or upmarket,” he reported.

Eyebrows were raised when BMW announced the MINI Clubman in 2007. How could the brand launch a car with two side doors on the driver’s side and just one on the passenger side?

At the time the door layout dominated reviews, but there’s much more to the Mini Clubman than that. This is a car that takes the best bits of the regular Mini hatch and adds extra practicality thanks to a bigger, estate-style bodyshell. And now, after six years on sale, you can buy a used Clubman for £6,000.

The Mini Clubman arrived in November 2007, with a choice of 118bhp petrol Cooper, 173bhp turbo petrol Cooper S and 108bhp turbodiesel Cooper D models. All engines displaced 1.6 litres, but in spring 2009 a 95bhp 1.4-litre One Clubman was introduced.

The Cooper SD Clubman from spring 2011 is a true performance diesel, with 143bhp from its 2.0-litre, although the 208bhp petrol John Cooper Works Clubman, from late 2009, is the fastest version.

There aren’t really any other premium compact estates to choose from, so the Clubman is in a class of its own. However, there are alternative premium small hatchbacks such as the Audi A3 and BMW 1 Series, which come with three or five doors; both are well built and in plentiful supply used, although they’re costly to buy and run.

An unusual alternative is the Toyota Urban Cruiser. It looks distinctive and is solidly put together, plus is more versatile than the Clubman. But it’s quite rare, and prices can be high.