Beefed-up MINI JCW Countryman SUV gets all the sporty touches, but can’t compete with rivals

Expensive and overweight it might be, but the JCW Countryman still has merit. It goes well, sounds good and has become a genuine five-seater, with bags of kit to help justify its price. But no matter how much fun it is to drive, the JCW can’t match rivals for overall appeal. At best, it’s an intriguing anomaly. At worst, it’s thirsty, heavy and expensive.

The new John Cooper Works Countryman joins the recently revealed JCW Clubman as the most potent MINI there has ever been. Its familiar 2.0-litre turbo petrol engine produces 228bhp and a generous 350Nm of torque, which is enough to send it from 0-62mph in just 6.5 seconds – and eventually to a top speed of 145mph.

It’s also one of the biggest and most expensive cars to wear the famous MINI badge. The wheelbase is 19cm longer than before, and with an eye-watering list price of £30,875 when paired with the standard-fit six-speed manual gearbox. It’ll take a committed MINI enthusiast to take the plunge, especially on this eight-speed auto, which costs £32,590 before options. 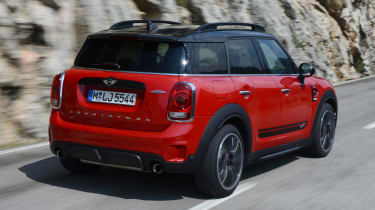 The JCW does, however, boast an impressive range of equipment to help justify its price. All cars get sat-nav, 18-inch wheels, flashy new LED headlights, and what is essentially MINI’s full Chili Pack of accessories as standard.

The sportier styling sets it apart from the existing Cooper S, too, with beefier bumpers, a subtle roof spoiler and JCW badges. In fact, it’s arguably the best looking Countryman yet.

Plus, of course, it’s also four-wheel drive, featuring MINI’s excellent ALL4 system. This allows the car to run using only the front wheels until it needs the extra grip, at which point the rear axle chips in to help out. 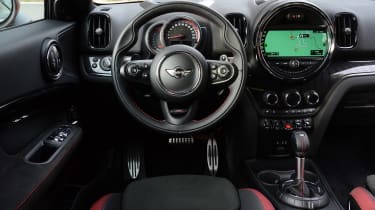 As such, MINI reckons the new JCW Countryman offers enough all-round appeal to match cars like the Audi Q2. The brand also claims the JCW offers an extra dose of fun, thanks to its quirkier cabin design, sharper driving dynamics and extra space.

In fact, due to slight increases in dimensions in all directions, the Countryman is now a truly usable family car. It’s much roomier in its three back seats, while its boot is also bigger than before at 450 litres – rising to 1,390 litres with the seats folded down. In theory, then, the Countryman has all the credentials to topple the Q2. It’s also built to an extremely high standard. It’s not quite as sophisticated inside as class leaders, but features a more youthful edge to its cabin that should appeal to family buyers.

We were impressed with the normal Countryman’s quick steering, playful chassis and strong performance, so the stakes were high for this new hot SUV. The good news is there’s strong, if not quite fiery, performance from its turbocharged engine, bags of mid- range flexibility, a good eight-speed auto gearbox, and tidy ride and handling.

Its dynamic personality can also be tuned in all sorts of different directions to suit whatever mood find yourself in. Select Sport in the Dynamic Drive menu and graphics appear within the 6.5-inch centre screen that tell you the JCW Countryman goes “like a rocket” and handles “like a go-kart.” 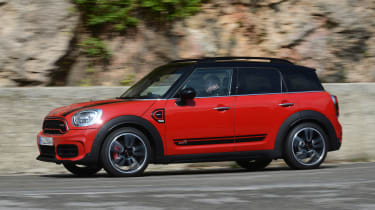 Inevitably there is some hyperbole here, but whatever the case, the steering, handling and throttle response all take a big step up in this mode, with the exhaust popping and banging as you’d expect from a top-spec JCW-tuned MINI. If you’re not in the mood, then you simply dial it back to ‘Mid’ or ‘Green’ and the dynamics calm back down. In Green mode, though, the throttle response does become pathetic. Unless you’re rapidly running out of fuel, we’d leave this setting well alone.

So is the JCW Countryman really the athlete MINI claims it to be on the road? No, not really. At almost 1,600kg, it’s very heavy for a car that wears the magic MINI badge. This alone means it was always going to struggle dynamically. And no matter how practical its new interior might be, it still lacks the high-quality feel of a Q2 inside.

Like the JCW Clubman we drove last year, in the end, the Countryman almost has too much of everything to truly succeed. Maybe they should have called it the Biggie; in this guise, it certainly isn’t a MINI anymore.