There was a whole industry built around tuning the classic Mini, but so far the go-faster brigade has kept away from the new model. However, all that has now changed, and there have been at least three specialists fighting to be first to get their hands on the Cooper S and build the most powerful MINI yet. 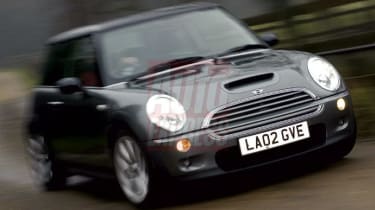 The fastest road-going MINI yet is a real pocket rocket - although not everyone will like the sound of the modified supercharger or the way the car has to fight to get the power down. Hartge's conversion isn't cheap, either.

There was a whole industry built around tuning the classic Mini, but so far the go-faster brigade has kept away from the new model. However, all that has now changed, and there have been at least three specialists fighting to be first to get their hands on the Cooper S and build the most powerful MINI yet.

German tuner Hartge - normally associated with boosting BMWs - won the race. And we pulled out all the stops to be the first to get behind the wheel of the uprated version.

Modifying the standard car's supercharger compressor and drive assemblies, together with a revised engine management system, has squeezed an extra 47bhp out of the 163bhp unit from the Cooper S. The result is a revelation for those who like nothing more than to have fun on country lanes.

The tuned engine revs much more keenly to the red line, and the extra turn of speed is noticeable. Figures show it, too - top speed is raised to 144mph, while the 0-60mph time tumbles from 7.4 to 6.6 seconds. But it's the mid-range performance that's most impressive - 40-60mph in fourth gear takes less than five seconds.

The assault on the aural senses is just as dramatic as the performance. Our test car came with Hartge's prototype exhaust, which has four barrels - reminiscent of the BMW M3. But even the noise from the big pipes is soon overtaken by the supercharger's gear-like whine, which resembles the sound of a conventional car in reverse. You'll love it or hate it, but even the biggest fan might find this irritating on a long trip.

It doesn't always have to be quite such frantic stuff, though. The Hartge Cooper S is happy to sit on the motorway at 70mph in sixth gear with the revs nudging 3,000rpm. Only the 17-inch alloys could possibly spoil such a journey by making for a more jarring ride - and they're standard MINI items! Hartge is soon to offer bespoke 18-inch rims, but these can surely only be for the masochist or those just wanting to pose down the high street.

At present, the car is subtle, with just the one badge to distinguish it from a standard offering, but extra body styling options are available.

Some will no doubt argue that a factory-finished Cooper S has plenty of power to satisfy, but those seeking bigger thrills will see why a Hartge version could fit the bill instead.

Our only concern, apart from the slightly bumpy ride, was the way the traction control sometimes struggled to cope with 250Nm of torque going through the front wheels. On wet roads and pushing out of corners, the warning light flashes away all the time. Still, it certainly makes things entertaining.