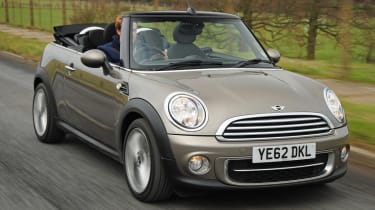 It's due for replacement, but the MINI Convertible is still the best drop-top supermini you can buy. Sure, the boot and back seats are tiny, and the firm ride is tiring. But the fully folding roof gives it a clear advantage in this test, while stop-start means the more powerful engine in the Cooper S delivers economy and emissions on a par with the Citroen.

There's a handful of small cabrios on the market, but none stands out as much as the MINI Convertible. Its upright windscreen, big headlights and squared-off rear are very distinctive.

The car in our pictures is a Cooper D, so it does without the bonnet scoop and centre-exit exhausts of the Cooper S tested, yet the big black canvas roof leaves you in no doubt that you’re looking at the Convertible model when the top is up.

Inside, the retro theme continues, with the large, round dials and toggle switches that are so familiar to the MINI range. Everything feels well built, while our car was fitted with the £120 Openometer – a dial that tells you how long you’ve had the roof open for. It’s a bit gimmicky, but adds to the Convertible’s fun factor.

With the roof up, the interior can feel a little oppressive, especially in the cramped back seats. In reality, you should consider these two seats as extra storage, as they are very narrow and there’s hardly any legroom.

Unlike the DS3 Cabrio, the MINI’s roof isn’t automatic, so you have to keep hold of the toggle switch while the mechanism whirrs into action. The roof is more complex than the Citroen’s, so it takes longer to open and close, at 17.5 seconds and 21 seconds respectively. This includes putting all the windows down, while you have to be moving at speeds below 20mph for it to work.

With the roof down, the feeling of open-air motoring is far more pronounced than it is in the Citroen. The folded canvas sits on top of the boot, but while we’ve been critical in the past of the fact that it obscures your view out the back, it’s not as bad as the DS3 Cabrio’s folded top. You feel a lot more of the breezein the Cooper S if you’re only travelling two- up, but MINI offers a wind deflector that sits across the back seats to reduce buffeting.

On the road, the MINI is a lot of fun to drive, although the firm ride can become tiresome on rough surfaces. The 1.6-litre turbo engine is the same as the DS3’s, but it’s tuned to 182bhp, which is 27bhp more than in the Citroen. That more than manages to counter the MINI’s extra weight, and it proved to be faster in all of our performance tests. It also comes with stop-start, so economy and emissions are on par with its lower-powered rival here.

Look at the figures, and the Cooper S is more expensive than the DS3, and it comes with less standard kit, too. Plus, you could easily get carried away with all the personalisation options, sending the price even higher. However, the fact that the roof opens fully to the elements will be enough for some buyers to justify its extra outlay.