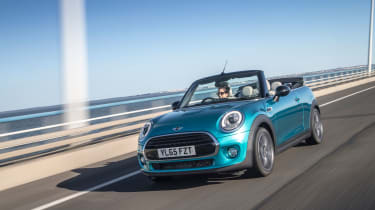 The MINI Cooper Convertible is worth a look if you want a small, fun-to-drive convertible car with space for four. The back seats are very small, though, and compared the the Cooper S version this 3-cylinder model sometimes feels a little sluggish. Still, it's great fun in the corners and the funky looks are sure to appeal to plenty of buyers.

We've already driven the new MINI Convertible in hot Cooper S form, but now we've had a go in the less potent standard Cooper, with a manual gearbox and the brand's 1.5-litre three-cylinder engine.

The UK-spec MINI Cooper Convertible tested here, gets the same engine as the hatchback version, which means there's 135bhp and 230Nm on tap from the cute cabriolet. Maximum torque arrives at 1,250rpm, which is useful for overtaking, but there is a noticeable flat spot as you pull away from a standstill.

The three-door Cooper hatch goes from 0-62mph in an impressive 7.9 seconds, but the extra 105kg of strengthening necessitated by losing the roof from this convertible model means almost a second of difference - pushing that time back to 8.8 seconds. Still, it's not all about stats - and while you can definitely feel the difference, the turbocharged engine's low-range torque adds to the fun. It can feel a little lethargic, though. 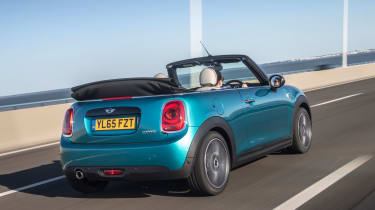 Unfortunately economy takes a hit as well, with 62.8mpg in the hatch dropping to 55.4mpg in the Convertible. Still, that's not a huge drop, and many will be willing to take the hit for that extra summertime enjoyment. CO2 emissions of 114g/km (up from 105g/km in the hatch) does put it in a higher tax bracket though.

Despite the extra weight added by the strengthening needed to convert the car to a soft-top, the MINI Cooper is still great fun to drive. The well-weighted steering, grippy chassis and slick gear change mean any clear stretch of road is a treat. Even though the car weighs more than its hatchback counterpart, it still feels nimble around corners, and although the suspension is a little firm it does keep the body roll in check. 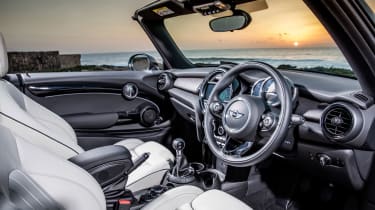 Part of the fun of a convertible is hearing the engine noise a little more, but the Cooper is a little disappointing here. Since the Cooper S can sound a bit over-the-top with its poppy exhaust, we had high hopes for the thrumming three-cylinder, but it's very quiet and is drowned out by wind noise. The fluttering turbo wastegate when you lift off is fun, though.

Speaking of wind noise, there’s quite a bit of buffeting at speed, but this can be helped if you fit wind deflector over the rear seats. It does stop you carrying any extra passengers, but it wards off the worst of the gusts. With the roof closed it's much like the hatch inside, and only fractionally noisier.

It's unlikely you'd be taking on many passengers back there anyway, as an average height driver takes up almost all the rear legroom. That's true of most MINIs, though, as well as the tiny 215-litre boot (160 litres with the roof open). The Convertible does let you lift up part of the roof for easier access to the hatch, though. 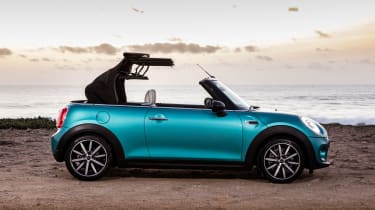 Interior quality on the Cooper is excellent, and every model gets a screen in the centre of the dash that accommodates the standard reversing camera. The switchgear mirrors the MINI's fun drive with a funky look, but it won't be for everyone. The central starter switch is a neat touch, and the comfortable seats and driving position mean the cabin feels just as welcoming as it does in the hatch.

Like the rest of the MINI range, there are a wide range of optional extras you can add, including a Union Jack fabric roof, heated seats, auto lights and wipers and an upgraded stereo system. Standard equipment includes keyless go, air-conditioning and Bluetooth connectivity, so make sure you keep an eye on the options list, as it can add a lot to the asking price, even on this entry-level car.