We've already rated the MINI Convertible highly, but how does the automatic version fare?

The new MINI Convertible is a highly fashionable car that adds a welcome dose of extra space and better build quality, but is also fun to drive like the previous version. The six-speed automatic allows the Convertible to be a perfect cruiser while also entertaining on more challenging roads. If it were our money though, we would save ourselves £1,600 and go for the manual and spend the cash saved on some desirable options.

It’s a well-known fact that we Brits love convertibles. But what do you think is Britain’s most popular drop-top? Answers like Audi TT Roadster, Mazda MX-5 or BMW 4 Series would seem sensible enough but the actual holder of that title is the British-built MINI Convertible.

The third-generation car arrives in March 2016 (fourth generation if you count the low-selling Rover Mini Cabriolet of the mid-1990s) and we’ve already given the thumbs up to the manual version, but what’s the automatic like?

Well, unsurprisingly, largely the same with only the last 20 per cent of its character being a little different. Driven back-to-back, there’s a clear difference between the new MINI Cooper S Convertible with a self-shifting box and the manual version. For an extra £1,625 the six-speed automatic not only brings an easier to drive experience, but also a more reserved character – here we have a Cooper S Convertible that loves to cruise. 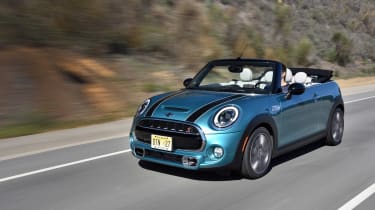 The six-speed automatic gearbox is incredibly smooth and makes bumbling through congested cities an absolute breeze. It’s also great on long country roads and motorways with the gearbox favouring a quick progression up to sixth gear to maximise fuel economy and refinement. MINI claims the auto will return 50.4mpg and emit 131g/km of CO2 – around 3mpg more and 8g/km less than the manual version.

But don’t think the auto is the soft option. Granted, it’s a little less entertaining than the manual but it’s still great fun on a twisting section of road. Switch to sport mode or use the steering wheel mounted paddles and the box can fire through its six ratios with great speed and accuracy. Slide the drive mode selector to sport (which sharpens up the car and throttle responses) and the Cooper S auto will crackle on upshifts and pop on down changes, just like the manual version. The manual does add another layer of fun as it blips the throttle when changing down gears but it’s a small point. 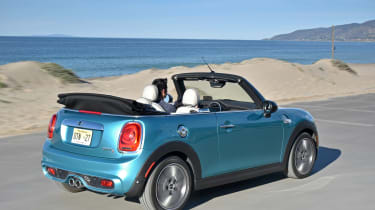 Whether you choose a self-shifter or a manual box for your MINI Convertible is one of the biggest decisions you’ll make – that is after you have waded through the options list. The MINI Convertible comes in two new unique colours and there’s a wealth of special kit including options packs that include puddle lamps that shine the MINI logo on the pavement, different leather colours and, for the first time on a MINI Convertible, a Union Jack roof (in black and grey, not red, white and blue) that costs a considerable £490.

Once you’ve waded through the options list and chosen what gearbox you want, you’ll be left with what is an excellently presented car. Just like the Hatch, the Convertible is a step up from the previous generation in terms of fit and finish. While slightly less agile than the car it replaces, the new drop-top is still bags of fun through twisty corners thanks to a chassis that is deliciously adjustable and steering that is sharp.

Our test car’s 189bhp 2.0-litre petrol engine was responsive and eager and, amazingly, despite MINI lopping off the roof, the Convertible almost feels as rigid as the hard-top. It’s quiet on the move with the roof up and, should the weather change, the canvas top can be lowered at speeds of less than 18mph. Do that and you can check how long you’ve had the roof down in the infotainment system with a counter than measures the number of hours the roof has been lowered – should you really want to. 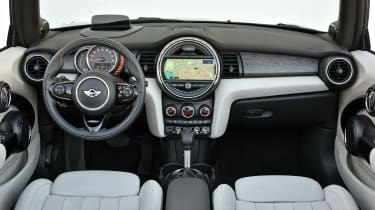 But, while MINI makes great claims about this new model boasting better space, it’s still incredibly tight in the back seats (and claustrophobic when the roof is up) and the boot is a little disappointing. But to be fair, 215 litres (160 litres when the roof is down) will be enough for most buyers.

In terms of engine choice, the Cooper S is a good blend of fun and usability. The range is bookended with the 136bhp 1.5-litre Cooper and the John Cooper Works with 231bhp. However, most buyers will opt for the 116bhp Cooper D which returns a claimed 74.3mpg and 100g/km of CO2. We’re looking to forward to trying this version soon as it’ll be the one that piques most people’s interest.