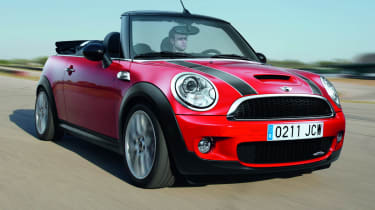 If you want the ultimate MINI, the MINI JCW Convertible variant is the one to go for. The John Cooper Works model comes with tweaked suspension, more power from its 1.6-litre turbocharged engine and a premium price-tag. Buyers will have to be prepared to live with a few compromises though, as the ride comfort is poor and there's barely enough space in the boot for your shopping.

The JCW Convertible is powered by a 1.6-litre turbocharged engine that produces an amazing 211bhp. That gives it a 0-62mph time of 6.9 seconds and progress is accompanied by a soundtrack of popping and banging from the exhaust. Stiffened suspension improves the standard MINI's handling even further, making this one of the most agile and fun to drive cars on the market. The ride comfort suffers immensely though.

Considering the kind of performance on offer the MINI JCW Convertible won't actually be too costly to run. Fuel economy is claimed to be almost 40mpg and the road tax bill will be relatively low thanks to CO2 emissions of 169g/km. MINI buyers can purchase a 'tlc' package that takes car of all servicing costs for five years/50,000 miles. A 'tlc XL' package costs an additional £275 but covers an extra three years/30,000 miles.

The styling of the new MINI has barely changed since it was introduced, and that's because it has been such a successful design. The JCW model builds on that with the addition of some smart alloy wheels and a few 'John Cooper Works' badges. The interior is unlike any other car on the market, with retro-inspired touches like the large central speedo and pilot-style toggle switches.

The MINI is far from the most practical car on the market, and the Convertible keeps up with what you might expect from such a small car. The boot itself is 170 litres, but with the roof down this figure lowers to just 125 litres. The folding roof can be opened or closed in 15 seconds and just the front section can be retracted to create a sunroof. As in the hatch, the back seats are almost just for show. It's incredibly difficult to squeeze anyone in back there.

The MINI hatchback scored a maximum of five stars in the Euro NCAP crash safety tests, and the Convertible should prove to be just as safe. It's got pop-up roll over hoops in case the car flips as well as driver, passenger, side and head airbags. Reliability is also likely to be fantastic as the MINI hasn't had any major issues in all the years it's been on sale. 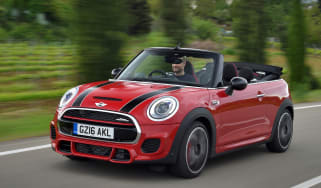 As its hottest convertible yet, the drop-top MINI JCW is great fun, but the stiff ride on UK roads shows up flaws
MINI John Cooper Works Convertible revealed at New York show 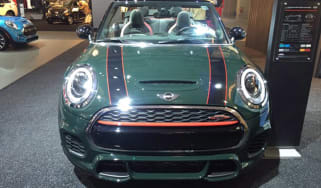 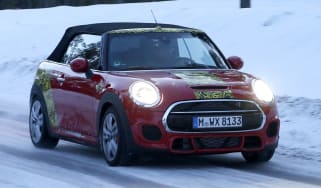 We've got a closer look at convertible version of 228bhp John Cooper Works MINI with the roof down, set for early 2016 release
Skip to HeaderSkip to Content